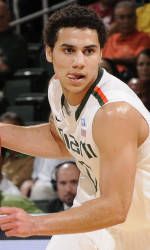 The Broadcasts
Catch the game on Fox Sports Network with Pete Pranica and Larry Conley making the call.

The Coach
Miami: Head coach Jim Larranaga is in his 28th season as a head coach and first at Miami. He has posted a 474-344 overall record and holds a 447-308 record in D-I games. Coach L was also the head coach of D-II American International for two years.