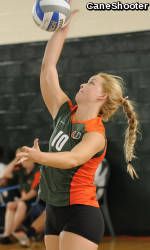 Miami enters the weekend having won four consecutive Atlantic Coast Conference (ACC) matches and holds an 8-1 record at home on the campaign. Dating back to last season, the Canes have won 13 of their last 14 at home. The Hurricanes come into the weekend with a record of 19-3 overall and an ACC record of 10-3, sitting third place in the league right now.

Earlier this year along venerable Tobacco Road, the Hurricanes split a pair of five-set matches with NC State and UNC, respectively.

Both matches this weekend will be streamed live on Canes All-Access, while radio coverage will be provided by WVUM (90.5 FM) – the student voice of the Miami Hurricanes.

SCOUTING NORTH CAROLINA
The North Carolina Tar Heels enter the weekend as one of the hottest teams in the ACC with a record of 19-5 overall and 11-2 in the ACC.

UNC is also stout defensively, ranking fifth in the conference in blocks per set (2.29). Chaniel Nelson and Cameron Van Noy lead the way for the Tar Heels up front, averaging 0.85 and 1.20 blocks per frame respectively. As a team, Carolina is holding its opponents to.178 attack efficiency, the third-best mark in the conference. Carolina also ranks fourth in the league in digs per set (16.05). Gibson leads the Tar Heels with 372 digs, followed by McGee (262) and freshman Ece Taner (133).

SERIES INFO
All-Time Record: Miami leads NC State, 13-1
Last Meeting: Miami won 3-2 on Oct. 7, 2011 in Raleigh, N.C.
Series Streak: Miami won the previous meeting this year by a 3-2 decision and has lost just one match all-time against the Wolfpack, that being a 3-0 setback last year in Raleigh, N.C.

Salata leads the Wolfpack with a career-high 283 kills this season, and her 3.04 kills per set ranks ninth in the ACC. She has recorded 845 kills in her four seasons with the Pack. Her 373 career blocks ranks seventh in school history. She also ranks fourth in the ACC with 117 blocks and eighth in the league with a .334 hitting percentage.

Senior libero Kelly Wood is one of two ironmen for the Wolfpack this season. She and junior setter Megan Cyr are the only two players on the roster who have played in all 97 sets this season.

The Road to 20
With its next win, the University of Miami will capture its fifth 20-win season in school history, and the third in the last four seasons (also doing so in 2008 and 2010).

Dig Pink a Success
The Hurricanes enjoyed their fourth consecutive year of success in helping raise money for the Susan G. Komen Foundation in support of Breast Cancer Awareness. This year, UMiami raised a considerable amount of money last weekend for its annual Dig Pink match against the University of Virginia on Friday, Oct. 28.

Lucky Number 21
Senior middle blocker Ali Becker, who wears No. 21 as her jersey, has surged onto the scene this year for the Hurricanes. The Katy, Texas native leads the league in hitting percentage and ranks 10th nationally in that category as she hits at a .401 clip. Becker also has a team second-best 231 kills (3.00 k/s).

Poll Position
The University of Miami is No. 26, respectively, this week in the AVCA Coaches Poll. In the Ratings Percentage Index (RPI), UM is No. 25 this week and is second amongst ACC schools in this week’s RPI, trailing only Florida State (No. 11). North Carolina is No. 29.