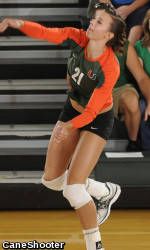 Miami (17-3, 8-3 ACC) saw its 11-match home win streak snapped at the hands of Georgia Tech in its last match inside the James L. Knight Sports Complex on Oct. 16. The Hurricanes are ready this weekend to host the Virginia Cavaliers and Virginia Tech Hokies.

The Hurricanes come into the weekend after having their school record six-week presence in the AVCA Coaches Poll Top 25 broken despite winning both matches last weekend at Boston College and at Maryland. However, UMiami is still receiving votes, coming in this week at No. 27, respectively.

The Canes are led by senior middle blocker Ali Becker (Katy, Texas) who’s leading the ACC in hitting percentage with a .389 clip. Becker also has a team second-best 208 kills (2.93 k/s). Senior All-America outside hitter Lane Carico (Manhattan Beach, Calif.) leads the team and ranks in the top five in the league for kills with 243 (3.52 k/s). Carico also is among the top 10 in the ACC for digs with 293 (4.25 d/s).

Redshirt senior setter Katie Gallagher (Winter Park, Fla.) sets up the offense and leads the ACC with 786 assists (11.07 a/s). Sophomore right side Alex Johnson (Tallahassee, Fla.) is third on the squad in kills with 193 (2.72 k/s).

SCOUTING VIRGINIA
Senior outside hitter Simone Asque is the playmaker for the Cavaliers, leading the way with a team-best 3.82 kills per set average – good enough for 71st in the NCAA. That also allows the senior outside hitter to rank third in the league for kills.

Meanwhile, junior middle blocker Jessica O’Shoney is second on the team with 2.84 kills per and her .361 hitting percentage ranks third in the league and 40th in the nation. She leads the team with 1.09 blocks per set, has a team-best 84 total blocks and leads the squad with 17 service aces on the season.

SCOUTING VIRGINIA TECH
Virginia Tech comes to the Sunshine State sporting a record of 13-9 overall and 6-5 in the ACC. The Hokies are led by five players with 150-plus kills, sparked by outside hitter Cara Baarendse (227 total / 2.64 per set). Behind her is Justine Record with 189 kills (2.36 k/s).

Dig Pink
Once again, the University of Miami is showing its support for Breast Cancer Awareness with its annual “Dig Pink” match when they wear pink and shows their support. Fans are encouraged to do the same and share funds through the Hurricanes fundraising drive supporting the cause with numerous schools around the country.

Miami on the National Stage
When the Hurricanes host Virginia Tech on Sunday, Oct. 30, it will mark the first home televised contest for UMiami since 2007. The Hurricanes versus Hokies will be shown live regionally on Fox Sports. Check your local cable/satellite affiliate for channel information.

Join the Discussion
One of the new features to the UMiami volleyball match day experience this season is a live chat through Cover It Live, where fans can interact with members of the Hurricanes’ Athletic Communications Office and other fans, getting an in-depth look at the action and analysis of the games. Join the discussion at HurricaneSports.com.