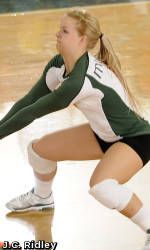 Coral Gables, Fla. – The No. 23 University of Miami volleyball team returns home this weekend for a pair of Atlantic Coast Conference matches against Clemson and Georgia Tech inside the James L. Knight Sports Complex.

Miami (13-1, 4-1 Atlantic Coast Conference) welcomes Clemson to start the weekend Friday, Oct. 14 at 6 p.m., followed by Georgia Tech on Sunday, Oct. 16 at 1 p.m. Live video for both matches will be provided by Canes All-Access on HurricaneSports.com. Audio will be provided by WVUM 90.5 FM and through WVUM.org.

The Hurricanes come into the weekend ranked in the league’s top three for several categories, including topping the charts in digs (19.29 per set). Senior middle blocker Ali Becker (Katy, Texas) is ranked second in the league in hitting percentage as she totes a .376 attack percentage on the campaign. Redshirt senior setter Katie Gallagher (Winter Park, Fla.) leads the league in assists (11.02 per set) and ranks second all-time at UMiami for assists in a career with 4,572.

SCOUTING CLEMSON
Clemson has played five set matches in four of their last five outings, going 2-2 in those matches. The Tigers have won three straight matches overall, and are coming off a weekend sweep of Boston College and Maryland in Clemson. The Tigers put up 72 kills against the Terps, which was the most for a Clemson team in the 25-point format, and the most overall since 2007. The Tigers have won nine of 11 overall.

Sandra Adeleye leads Clemson offensively at 3.17 kills per set, and Serenat Yaz, who is also averaging more than three kills per set in ACC play. Junior Alexa Rand leads the league in hitting at .387, and is second in the ACC and seventh nationally in blocking at 1.51 per set.

The Tigers rank 15th nationally at 2.75 blocks per set, while ranking second in the ACC in opponent hitting percentage.

SCOUTING GEORGIA TECH
Georgia Tech will first travel to Florida State before coming down to Coral Gables. The Yellow Jackets use the power of Monique Mead for kills as the senior outside hitter leads the ACC in kills per set and is third in the nation at 4.98. Mead is also averaging 2.60 digs per set and 0.89 blocks.

The Jackets have a dual threat at the setter position as Freshman Ali Santi is third in the ACC dishing out 10.89 assists per set. Her 60 assists against NC State was good enough for second most in a game in the ACC this season and also improved her assists/set in league play to 11.00, good enough for third. She has five double-doubles this season.

On the campaign, Carico has helped the Hurricanes to their first-ever regular season ranking with the Canes getting as high as No. 20 in Week Five. Carico is fourth in the Atlantic Coast Conference (ACC) in kills with 186 (3.44 per set), fifth in digs with 233 (4.31 per set) and fourth in points with 212.5 (3.94 per set). She’s also second on the team with 15 service aces.

Lane Carico Earns Third ACC Weekly Honor
For the third time this year, Lane Carico picked up ACC Player of the Week honors after a stellar performance against Wake Forest and Duke two weeks ago.

Carico helped Miami extend its winning streak to four matches and its home court winning streak to 10 straight as she registered 5.50 kills per set and 3.67 digs per set in wins over Wake Forest and Duke, respectively. The native of Manhattan Beach, Calif. hit .389 over the weekend and put down a team-high 33 kills against just five errors on 72 swings for the Canes.

She helped Miami sweep Duke and break a three-match losing skid to the Blue Devils, recording the first win over Duke since a 3-0 decision in 2008. Additionally, Carico became the school’s all-time leader in kills with 1,495, surpassing Karla Johnson for the top honor. In both matches on the weekend, Carico picked up double-doubles to extend her streak to four and increase her total to nine on the year.

Life in the Fast Lane
Senior outside hitter Lane Carico’s fourth kill of the match versus Duke on October 2 allowed her to etch her name as the school’s all-time leader in kills, surpassing Karla Johnson (2002-05) atop the list. Currently, Carico has 1,495 career kills.

Home Is Where the Heart Is
With two wins coming inside the James L. Knight Sports Complex against league foes Wake Forest (Sept. 30) and Duke (Oct. 2), the University of Miami extended its home winning streak to 10 matches dating back to last year. The last home loss was a 3-2 decision against the Blue Devils of Duke on Oct. 22, 2010.

Coaching Milestone Achieved
UMiami head coach Nicole Lantagne Welch collected her 200th career win following the Hurricanes 3-0 win over Auburn. Lantagne Welch is already the winningest coach in UM volleyball history, and has served as the only coach since the program was brought back in 2001.