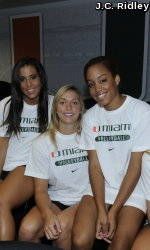 For the Hurricanes, this weekend marks their third consecutive ACC road contest of the year, and the fourth-straight dating back to the end of last season.

Miami (9-1, 0-1 ACC) enters the weekend ranked No. 21 in the AVCA Coaches Top 25 poll, and sits 19th in the Volleyball Magazine poll. The Canes started off the year hot at 9-0 with signature wins over 18th-ranked Oklahoma and at Pepperdine, before stumbling to Florida State last week in Tallahassee.

Live stats and video for the match against Virginia Tech can be found at HokieSports.com, while the Virginia match will have stats available at VirginiaSports.com.

Tough Traditional Two-Match Stretch
For the Hurricanes, the upcoming stretch of matches at VTech and UVa has always been a tough stretch of contests. The Canes have not won at UVa since 2007, though not dropping both matches against VTech and UVa in the Commonwealth State since 2008.

Last year, Miami dropped its first match at Virginia before rebounding for a win at Va. Tech. A year prior, the Canes won against the Hokies before dropping the road finale at Virginia on a Halloween weekend.

Scouting Virginia
The Virginia Cavaliers enter the weekend with a 6-5 overall record and a league mark of 0-1 after a loss at rival Virginia Tech last week. However, the Cavs do hold a 4-2 record at home.

Miami on the National Stage
Last week’s ESPNU televised contest between Florida State and Miami in Tallahassee was the first nationally televised volleyball contest for the Hurricanes in school history. Miami will hold its next television match against Virginia Tech in Coral Gables on Oct. 30.

What a Difference a Year Makes
Redshirt freshman middle blocker Emani Sims made a statement in her first-ever collegiate match versus Jacksonville State at the Tiger Classic. Sims registered a team-high tying eight kills in that match, followed by a match-high nine blocks (six assisted) against LSU in the title match.

Join the Discussion
One of the new features to the UMiami volleyball match day experience this season is a live chat through Cover It Live, where fans can interact with members of the Hurricanes’ Sports Media Relations Office and other fans, getting an in-depth look at the action and analysis of the games. Join the discussion at HurricaneSports.com.