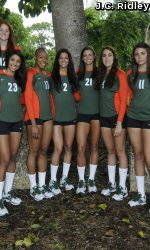 Lexington, Ky. – After defeating 18th-ranked Oklahoma over the weekend, the University of Miami volleyball team entered the AVCA Top 25 Coaches Poll this week at No. 20. This is the highest ranking for the Hurricanes in school history.

Miami (9-0) is off to its second-best start in the last four years. The 2008 team began the year 13-0. The Canes are also riding an impressive 14-match winning streak in regular season contests, dating back to last season. For the Hurricanes, this is the first time in school history they have been ranked in the polls during the regular season. UM ended the 2002 campaign ranked 23rd in the AVCA poll after reaching the “Sweet 16” of the NCAA Tournament.

“Certainly, we are happy to finally be recognized nationally,” said head coach Nicole Lantagne Welch. “The team deserves it. It’s very tough to be undefeated and even tougher with the non-conference schedule we had. However, this group has been resilient so far this season. Now we are looking forward to ACC play and everyone starts out 0-0. So, it is a starting over point for us, a new season and we know we have our work cut out for us beginning Wednesday.”

The Hurricanes have won three regular season tournaments to begin the 2011 campaign, including the Hurricane Invitational this past weekend. Last weekend, the Canes won the Pepperdine Asics Classic, defeating the host Pepperdine Waves in the title match.

UMiami returns to the hardwood Wednesday taking on in-state and ACC rival Florida State in a nationally televised contest on ESPNU beginning at 8 p.m. The match will take place in Tallahassee, Fla.