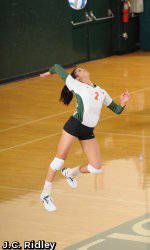 In one of the closest matches of the year for Miami, the Hurricanes (17-7, 7-6 Atlantic Coast Conference) used a powerful come-from-behind effort Saturday night to close their two-match “Commonwealth State” road trip with a split.

Miami never trailed in the fourth set, opening up a 5-1 advantage early-on behind three consecutive Hokies attack errors, followed by a kill from Carico (Manhattan Beach, Calif.). After hitting sub-.200 in the second and third frames, the `Canes used three kills apiece from freshman Alexandria Johnson (Tallahassee, Fla.) and Carico to hit at a .306 clip (13k-2e-36ta) in the fourth, en route to the 25-18 win.

The Hokies would knot the set at 14-all behind the efforts of Jennifer Wiker and Victoria Hamsher combining for blocks at the net, followed by another solo block by teammate Cara Baarendse. Hamsher finished the night with a match-high seven assisted blocks.

But in the end, the `Canes got a timely kill from Carico – one of her two in the set, and used a final Virginia Tech attack error to seal the 16-14 win, and close-out the match victory.

The win for Miami allowed the Hurricanes to move to 3-2 in five-set matches this year.

Virginia Tech was led by Baarendse, finishing the night with a match-high 23 kills, adding five digs and two blocks (one solo). Justine Record was behind her with 16 kills and 15 digs, while teammate Felicia Willoughby provided the Hokies with 14 kills and two assisted blocks. Setter Erin Leaser handed out a match-high 62 assists, and libero Morgan O’Neill collected 17 digs.

Miami was led by Carico with 20 kills, giving the two-time AVCA All-East Region performer her third 20-plus kills match on the year. Carico’s 15 digs allowed her a ninth consecutive double-double, giving her 19 total on the campaign. The only other Hurricanes performer in double-figures for kills was Becker with 10, also providing three assisted blocks.

Redshirt junior setter Katie Gallagher (Winter Park, Fla.) setup 46 assists, and freshman libero Ryan Shaffer (San Jose, Calif.) provided a match-high 21 digs. It was the fifth time this year Shaffer has collected 20 or more digs in a match, with a season-best 32 coming against Duke a week ago in Coral Gables.

Miami will continue its four-match road trek beginning the second half of the conference slate on Fri., Nov. 5 at Clemson, in a match scheduled for 7 p.m., in Clemson, S.C. The following day, the `Canes will travel to Atlanta to face Georgia Tech, also scheduled for 7 p.m.