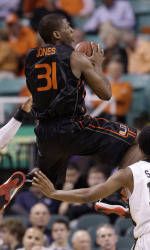 CORAL GABLES, FLA. – University of Miami men’s basketball fans will have an opportunity to catch the preseason debut of their Hurricanes and select their seats for the 2010-11 season during UM’s exhibition game versus Barry on Wed., Nov. 3, at 7:30 p.m.

Admission to the game will be free, however fans will need to download and print their complimentary tickets.

Current season ticket holders may relocate their seats on Wednesday, while fans that have yet to purchase their 2010-11 season tickets will have the opportunity to choose their seats. Reserved seat season tickets begin as low as $99, while prices have been reduced in several sections – including a $650 savings in H-100 seats.

Fans will also see several changes to the BankUnited Center this season, including an enhanced student section. The pep band has relocated to Section 117 of the student section and instead of rising up from the baseline, the student section has now been altered to wrap around the visitor’s end of the court, using the lower level of Sections 114-121.

Team benches have switched, with the home team bench directly in front of Sections 102 and 103 and the visiting team bench by Sections 121 and122. Miami will still enter and exit the court through the tunnel by the student section.

To print your complimentary tickets, log onto Ticketmaster here — select the number of tickets you need, fill out your information and your tickets will be e-mailed to you. For additional ticket information, please contact the Hurricane Ticket Office online at www.hurricanesports.com or by phone at 1-800-GO-CANES.