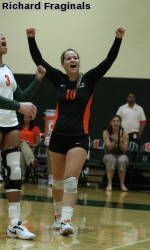 Miami (16-6, 6-5 Atlantic Coast Conference) bounced back from Friday’s heartbreaking five-set loss to Duke in extraordinary fashion on Sunday against the Demon Deacons. UM hit at a .384 clip as a team, with four players finishing above the .400 percent plateau in the match. As a unit, the Hurricanes hit 81 percent in the opener, followed by a season-best set-high 87 percent in the second frame.

Two days after defeating No. 24 Florida State in Tallahassee, Wake Forest (13-8, 6-5 ACC) led for a total of just eight points in the entire match against the `Canes. The Demon Deacons were limited to just .170 hitting on the day, while committing six service errors against just one ace.

The Demon Deacons were sparked on the day by Carlin Salmon with a team-high 10 kills. Andrea Beck added nine kills and three digs, while Kadija Fornah finished with six kills and five digs. Setter Kelsey Jones had 28 assists, and libero Megan Thornberry paced the defense with 13 digs.

Miami was led by Carico’s double-double effort of 11 kills and 13 digs, giving the outside hitter her 17th double-double of the year – including seven consecutive. Junior Christine Williamson (Tampa, Fla.) finished with nine kills and hitting at a .533 clip. Freshman Alexandria Johnson (Tallahassee, Fla.) chipped in with eight kills, five digs and two assisted blocks.

Gallagher ended the day with a match-high 31 assists, and freshman Ryan Shaffer (San Jose, Calif.) collected a match-high 16 digs from her libero position.

Miami will take to the court again on Fri., Oct 29, traveling to the University of Virginia at 7 p.m. The `Canes defeated the Cavaliers earlier this season in Coral Gables.

With the month of October being Breast Cancer Awareness month, Sunday’s match for the Hurricanes served as this year’s “Dig Pink” match in conjunction with the Side-Out Foundation. This year, Miami raised $2,470. Prior to the match, the `Canes wore pink warm-ups, while sporting pink ribbons in their hair throughout the match. Pink t-shirts were also available when fans entered the arena for a donation of just $10.