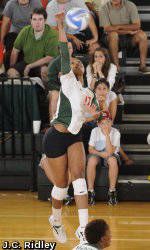 Coral Gables, Fla. – The University of Miami volleyball team used a team-best nine kills from junior outside hitter Christine Williamson to pick up a key ACC home win, Friday night at the James L. Knight Sports Complex. The 3-0 win (25-18, 25-19, 25-14) over Virginia Tech evened the Hurricanes’ ACC record at 1-1, while improving their season record to 11-2.

Miami (11-2, 1-1 Atlantic Coast Conference) rode the strength of Williamson’s .450 attack percentage, as well as redshirt junior setter Katie Gallagher with a .750 clip, to register the fourth match this season in which the `Canes have hit above the .350 mark.

With UM picking up the victory in the opening frame, Virginia Tech (10-2, 1-1 ACC) led, 17-13, in the second set after a kill from Jennifer Wiker off the set of Justine Record. Hurricanes’ freshman outside hitter Alexandria Johnson then secured one of her eight kills on the night to begin a 6-0 run, all of which came on her own serve. That would allow the `Canes to overtake the Hokies, 19-17, in a rally that saw two Virginia Tech timeouts.

“We have a lot of people that can contribute, and have a lot of balance,” said UM 10th-year head coach Nicole Lantagne Welch. “We just have to keep fighting when things don’t go our way for a few points, and we did exactly that tonight.”

Johnson scored two service aces during the run, before All-ACC junior outside hitter Lane Carico recorded consecutive service aces of her own to help lead the `Canes to the 25-19 come-from-behind win in the set.

In the third set, it was all UM as Williamson placed five of her nine kills in the frame, assisted by junior middle blocker Ali Becker with three kills and a block assist. The `Canes took the set and match from the Hokies, earning the 25-14 decision.

For the second consecutive match, the Knight Sports Complex was nearly sold-out as several members of Miami’s men’s and women’s basketball teams, soccer team, football team and women’s tennis team were in attendance cheering on their fellow Hurricanes.

Virginia Tech was led offensively by the play of Cara Baarendse with a match-high 14 kills and seven digs. She was followed by Felicia Willoughby with nine kills and Wiker with seven. Hokies’ setter Erin Leaser collected a match-high 35 assists, while also leading the team with 11 digs for a double-double effort.

Freshman Taylor Hollins started her first match in the libero position for the `Canes, the Long Beach, Calif., native scooping up a match-high 15 digs in the process.

UM steps back on the court Sun., Sept. 26, taking on the University of Virginia at 1 p.m., at the James L. Knight Sports Complex on the UM campus. Virginia was swept, 3-0, by No. 15 Florida State tonight in Tallahassee.

“Virginia is a very strong team,” commented Lantagne Welch. “They have a lot of younger players, and when they put it all together, they’re a tough team. We’re expecting a battle.”