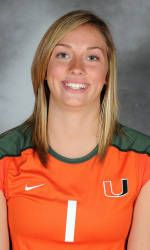 Miami (3-1) won its third consecutive home-opener on Tuesday, and improved its winning streak to eight consecutive against FAU.

UM led in the opening set, 8-6, before Lici McGee claimed one of her set-high tying four kills to begin a 9-4 run that increased the Hurricanes lead, 17-10. Christine Williamson, a junior outside hitter from Tampa, delivered two of her four kills in the set down the stretch, also delivering the `Canes a 25-13 victory in the opener.

FAU (3-1) trailed to start the second set, 5-0, but the Owls’ Christina Wallinger rallied her team to a 10-10 deadlock, recording one of her six kills in the set off the feed of Kristyna Dzmuranova for the tying point. The `Canes Alexandria Johnson began a 3-0 UM rally, followed by kills from Ali Becker and Williamson to put their team back out in front, 13-10.

However, FAU proved resilient once again as Wallinger had a kill and assisted teammate Joanne Marras Tate for a block to even the set, 14-14. But it would be the play of Williamson that sparked the `Canes to a 4-0 run that put the team out in front for good, closing the set on an 11-4 charge that secured them a 2-0 advantage in the match heading into the break, courtesy the 25-18 in the set.

UM’s Johnson, a freshman from Tallahassee, Fla., was second on the team in kills during the second set, picking up five in the frame.

UM raced out to a quick 6-0 lead to start the third set behind three consecutive kills from Lane Carico, and a service ace by freshman Taylor Hollins. Though trailing later in the set, 12-7, the Owls refused to go away quietly as they went on an 8-3 run, thanks in part to two kills and a service ace from Wallinger. The Owls Marras Tate picked up a kill during to keep the run alive as well.

The two teams traded kills and blocks to keep things even, 18-18, before a kill from Williamson and a service ace from freshman libero Ryan Shaffer provided UM with a much-needed two-point edge, 20-18.

Redshirt junior setter Katie Gallagher registered a kill and a service ace in order to stretch the UM lead, 22-19. UM’s Johnson laid down two kills, and Carico joined senior Ariell Cooke at the net for a block, giving UM the set and match victory with the hard-fought 25-21 advantage.

“It feels nice to win in three,” said UM head coach Nicole Lantagne Welch afterwards. “It’s nice to come out strong; get a game won; and start taking control of the match.”

FAU was led on the evening by Wallinger’s 13 kills, followed by Dzmuranova and Anne Vaughan with five kills apiece. Setter Marras Tate passed up 24 assists, and libero Cintia Nightingale led the defense with seven digs.

Miami was paced by Williamson’s match-high 16 kills, also finishing with three digs and a solo block. Johnson touched double-figures in kills for the first time in her Hurricanes career, finishing with 10, while pulling in seven digs and assisting on a block. Hollins had a match-high three service aces, and classmate Shaffer led the defense with 13 digs.

“Christine [Williamson] started off with a great first swing, and jumped right into the match ready to go,” said Lantagne Welch. “She was very effective tonight, and brought good energy to the court. She has great talent, and it was nice to see her get up there and use it to really carry us offensively.”

Miami will now prepare for its second tournament of the regulars season, traveling to the Blue Raider Bash hosted by Middle Tennessee State University in Murfreesboro, Tenn. The `Canes will open with Auburn on Fri., Sept. 3 at 7 p.m. (CST).