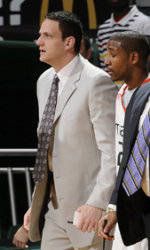 “It’s great to have Todor back in the Miami basketball family,” said Coach Haith. “As a former player, he understands the physical and mental demands of the season, and he knows what is necessary to help our student-athletes reach and maintain peak conditioning. He will be an asset to our program.”

A 2003 graduate of Western Kentucky, Pandov spent the last two seasons as the strength and conditioning coach for his alma mater.

Pandov previously served on the Hurricanes’ staff as a graduate manager during the 2007-08 campaign when Miami advanced to the second round of the NCAA Tournament.

Prior to that, Pandov was an assistant coach at St. Edward’s (Texas) and a volunteer at the University of Texas, assisting the program during its 2005-06 campaign when the Longhorns went 29-6 and advanced to the NCAA’s second round. While at Texas, he worked with Todd Wright, who is widely recognized as one of the top strength and conditioning coaches in the nation.

Originally from Plovdiv, Bulgaria, Pandov played three seasons for the Hilltoppers. After a breakout sophomore campaign, averaging 8.8 points and 3.3 rebounds per game en route to a 28-4 record, a Sun Belt Conference Regular Season and Tournament Championship and an appearance in the NCAA Tournament, Pandov was slated to be a starter entering his junior season in 2002-03.  But after scoring 12 points and grabbing five rebounds in 23 minutes at top-ranked Arizona in the season-opener, he went down with a season-ending knee injury.

Following the conclusion of his collegiate career, Pandov played professionally for Eiffel Towers in Holland in 2004-05, earning All-Star honors.

He and his wife, Kimberly, have one son, Mason (2), who was born in Miami during Pandov’s first stint with the Hurricanes.