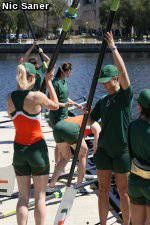 Coral Gables, Fla. – The University of Miami rowing team is set to compete in this year’s Atlantic Coast Conference Rowing Championships, taking place Sat., Apr. 24, at Lake Hartwell in Clemson, S.C. The event begins at 9 a.m., and is free to the public.

With two scrimmage races and two regattas in the books for the 2010 spring season, the Hurricanes are set for the ACC Championships on Saturday. Under the direction of first-year head coach Andrew Carter, the `Canes will field two boats in this year’s championships, using a Varsity Four and a Varsity Eight.

“For a variety of reasons, we’ll be fielding two crews only for the Championship – a 1V8+ and a V4+,” stated UM head rowing coach Andrew Carter. “The field is very strong at the top end with Virginia being ranked No. 1 in the nation over the past two weeks, and Clemson digging in at No. 12 during that same period. On top of that, there have been significant gains made by the other three programs this year as opposed to last year.

“Our student-athletes have set their goals, and while extremely challenging, they are achievable. Training over the past 10 days has been going pretty well, and I think everyone is excited for the upcoming opportunity in Clemson.”

Earlier in the spring slate, UM had strong showings at the Dale England Cup in Indiana, as well as the Knecht Cup in New Jersey. The `Canes also enjoyed positive results from its boats in scrimmage races against Michigan and Connecticut.

In last year’s event, Miami finished third overall, matching the highest finish for the `Canes in the ACC Championships. Laura Cordner and Emily Wingrove were selected to the All-ACC Team, while Miami finished with 34 points on the day. That was 11 points better than Boston College who finished in fourth place. Clemson claimed its first-ever ACC Rowing Championship by sweeping the Varsity Four and Varsity Eight events to finish with 55 points.

This year, Miami will use several returning rowers in the ACC Championships. Among those returnees are Kate Rickers, Monika Sajincic, Molly Thornton and Sarah Medland. As for second-year rowers that will make an impact for UM, they will include Theresa Recicar and Maria Siemann.

Miami coxswains Christina Crocco and Heather Hollembeak will guide the boats in the V8+ and V4+ boats.

For more information on the ACC Rowing Championships, please log on to www.theacc.com. The official championship website can be accessed by clicking here. Once there, you will find live updates, a complete press release from the ACC Office, as well as a complete schedule of all races.