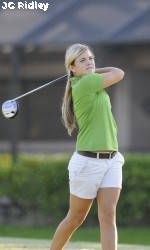 Gilbert Leads Miami on Day One at ACC Championships

Wake Forest leads after the first 18 holes posting a 286. The Demon Deacons sit two-over for the championship, which is two strokes better than Virginia and Duke who are both tied for second at four-over par 288. Maryland (299), Florida State (301) and NC State (301) finish out the top five. Miami is eighth.

Duke’s Alison Whitaker leads the field after firing an opening round two-under 69. Gilbert is tied for 21st. She shot one-over par 36 on the front nine with two birdies. She shot four-over par on the back nine is five-over for the tournament.

Freshman Melanie Kleiner rounded out Miami’s five by shooting an 89.

The 54-hole tournament continues with the second round on Saturday at the par-71, 6,355-yard course. The Hurricanes are paired with Florida State and Boston College during Saturday’s second round which will tee off at 8:30 a.m.

Live scoring of the tournament will be on Golfstat.com.

ACC Select will broadcast a free webcast of the championship with coverage of the No. 17 and No. 18 holes. The broadcast is slated to begin at approximately 1 p.m. during Saturday and Sunday’s rounds.