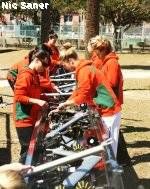 Cherry Hill, N.J. – The University of Miami rowing team finished strong on the second and final day of the Knecht Cup, picking up two medals at Camden County Park in Cherry Hill, N.J. Racing took place on Cooper River, and the event was hosted by Villanova University.

After a strong opening day or racing on Saturday, the Hurricanes took to the water with determination on Sunday. The results proved to be positive once again, as UM finished just its second regatta of the spring season. However, the weather was much of the same from Saturday with strong breezes swirling around the lake all day.

In Novice Four action Sunday, Miami took a third place time of 8:11.72 in the “B” Final, using the team of Taylor Forster (stroke), Marie-Claire Serou (2), Blair Hamrick (3), Carin Mazaira (bow) and Alisha Bacchus (coxswain) in the race. Colgate took the win in the race, collecting a finishing time of 7:57.74.

In the Varsity Four “A” Final, Miami’s second boat team of Maria Siemann (stroke), Molly Thornton (2), Kate Rickers (3), Hannah McKay (bow) and Heather Hollembeak (coxswain) rowed their way to a first place time of 8:00.05 on the day. The time turned in by UM was three seconds faster than ACC opponent Boston College (8:03.68).

“I think, overall, everything went pretty well this weekend,” commented UM rowing head coach Andrew Carter. “The racing was positive for our kids, and they were able to take away a few medals that renewed their confidence, and gave them a sense of positive energy. The crews managed themselves well today, and they rowed well in the process. All of our crews raced with a great deal of poise.”

Miami’s “A” boat finished second overall in the finals of the Varsity Four during the “A” Finals, crossing the finish line at 7:40.06. In that race, UM used the team of Sarah Medland (stroke), Theresa Recicar (2), Hana Janatova (3), Katalin Horvath (bow) and Christina Crocco (coxswain). Colgate won the race with a time of 7:33.50.

The final race of the regatta for UM came in the Varsity Eight finals, with the `Canes coming in fourth with a mark of 7:00.40 in the “C” Final. UM used the strokes of Hannah McKay (stroke), Molly Thornton (2), Monika Sajincic (3), Theresa Recicar (4), Hana Janatova (5), Sarah Medland (6), Katalin Horvath (7), Kate Rickers (bow) and Christina Crocco (coxswain) in the race.

“I think that our Varsity Eight could have rowed a little better today, and this weekend,” stated Carter. “However, they did some things, technically, that were good, and I think they were just out of steam towards the end of each day when they raced. They were just missing a little spark at the end of racing today that would have given them that extra speed they needed. But they met the challenge this weekend of intense racing, and were racing against fresher crews each day that had not competed in extra races each day.”

Since 2001, the Knecht Cup has featured some of the best collegiate rowing in one of the biggest east coast regattas for both men and women, respectively. For complete results of the Knecht Cup, log on to http://www.villanovarowing.com/knecht/realtimeResults.html.

Miami will get back to the water again at the Atlantic Coast Conference Championships on Sat., Apr. 24, in Clemson, S.C. For more information on the event, log on to www.theacc.com.