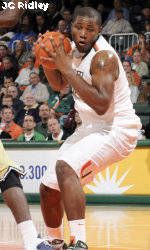 “I am extremely proud of what these freshmen have accomplished,” said Head Miami Coach Frank Haith. “Durand has risen to every challenge this season, while Reggie responded very favorably in a high-pressure situation this week. Both of these players are extremely talented and have the will and desire to keep improving. They will be key components as this program continues to move forward.”

Miami’s first-ever ACC All-Rookie Team pick as well, Scott averaged a team-high 14.7 points, 5.0 rebounds, 3.0 assists and 1.0 steal over the three games, while converting 48.6 percent from the floor and 75.0 percent from the charity stripe. The New York native got the attention of ACC fans with a team-high 17 points and six rebounds in Miami’s 70-65 quarterfinal victory over Virginia Tech, including nine points in the final 2:42 – including hitting all four free throw attempts during that span – to help secure the win for the Hurricanes.

Scott, who has scored in double-figures in eight of the last nine games, continued his strong play in the semifinal contest versus Duke, finishing with a team-high 21 points on 10-of-15 shooting, four rebounds, three assists and a pair of steals. It was his third 20-point scoring performance of the season – the most for a Miami freshman since Guillermo Diaz accomplished the feat in 2003-04.

Johnson averaged 13.7 points, a team-high 8.0 rebounds, 1.7 blocks and 1.0 assist per game over Miami’s 2-1 tournament run. The 6-10 center got the Hurricanes off to a strong start in the 83-62 first-round rout of Wake Forest, finishing with a career-high 22 points, shooting 8-for-8 from the field versus the Demon Deacons, while adding a perfect 6-for-6 showing from the foul line. He tied a school record and also established a new ACC Tournament freshman record, becoming the first rookie to finish 100 percent from the field in a tourney game (minimum seven field goals made). He broke the previous freshman high of 81.8 percent (9-11) set by Maryland’s Ernest Graham (versus NC State) in 1978.

Johnson, who finished the regular season third among all ACC freshmen in rebounding average and 10th among all players in free throw shooting in conference games, continued strong play in the quarterfinal win over the Hokies by grabbing a career- and game-high 12 rebounds and putting up three blocks. In Saturday’s semifinal game versus Duke, the Winston-Salem native posted 14 points, eight boards and a pair of blocks, while shooting 50 percent from the field and 80 percent from the charity stripe (8-10).