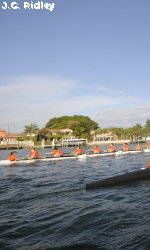 The day began with two races held in varsity eight action, as the race took place over the 1,400-meter course.

The Hurricanes varsity eight crew crossed the finish line with a time of 4:50.1 to earn the win over the Huskies, with UConn’s “A” boat coming in at 4:57.4. UConn also fielded a second boat in the race, that one timing at 5:05.2.

In the second varsity eight race, UConn pulled away just ahead of the Miami boat in the end, using a winning time of 4:53.0 to finish ahead of Miami (4:53.2). The Hurricanes did collect a win over the Huskies’ “B” boat, which crossed at 5:16.1.

“In all, there were some positive things to take away from the scrimmaging today,” stated first-year UM head rowing coach Andrew Carter. “Unlike the Michigan matchup, there were no stroke rate caps which left the door open for the crews to experiment with various things. The UConn crews were pretty aggressive in this department, and certainly came ready to push their envelope in this early part of the season. Our varsity crew was a bit more conservative and put the lid on close to 30 strokes per minute with a few short periods at 32.”

In novice action, UConn collected both race victories, but the Hurricanes stuck close to the Huskies in the first race. The Huskies finished at 5:08.0, while Miami followed at 5:24.0 in the race.

In the second novice race, UConn went out to an early lead, one it wouldn’t relinquish, as the Huskies raced to a time of 5:05.0, while the Hurricanes trailed in second at 5:20.0. For the UM novice crew, this was the first action for many of them as Hurricanes, with many of the newcomers joining the team following the fall campaign.

“I think we accomplished some good things today, and had an opportunity to test some people in new positions and on new sides,” continued Carter. “We’ll take the lessons into the next couple of weeks of training as we prepare for our first formal regatta at Indiana.”

The Hurricanes won’t get back on the water again until Apr. 2-3, when Miami takes part in the Dale England Cup, hosted by the University of Indiana in Bloomington.