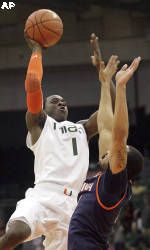 The Hurricanes have produced an all-conference player in all six years under head coach Frank Haith.

Miami’s first-ever All-Rookie Team pick, Scott was a UM-best four-time ACC Rookie of the Week selection and posted two of the league’s top-five scoring performances by freshman – the only ACC newcomer to appear more than once. The league’s leading freshman in assists with a team-high tying 3.5 per game, he turned in the league’s top-three assists performances by a freshman in 2009-10, including a season-high 10 — with zero turnovers — in his collegiate debut versus North Carolina Central (11/14) to tie an ACC freshman record.

In addition, the New York City-native is the only ACC rookie to rank among the top-six freshmen in scoring (third with 9.8 ppg), rebounding (sixth with 3.9 rpg) and assists. His 11.2 points per game versus ACC opponents ranks second-most among conference freshmen and 20th among all ACC players.

“Durand Scott is a phenomenal, dynamic young player,” said Coach Haith. “He has that innate drive that allows him to take over games. He is also one of the most unselfish players and will do whatever he needs to help his team win – whether it’s scoring, rebounding or playmaking. He is a joy to coach and has a bright, bright future ahead of him.”

Appearing in all 30 games this season with 25 starts, Scott has posted 14 double-figure scoring efforts, including a season-high 29 points at North Carolina — the second-highest scoring output by an ACC freshman in 2009-10, and scored 20 points versus Minnesota, becoming the first Hurricane freshman to post multiple 20-point games in his rookie campaign since Guillermo Diaz in 2003-04. He also had 19 points versus Duke.