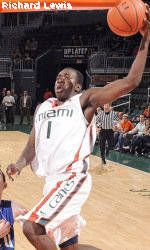 CORAL GABLES, Fla… University of Miami freshman guard Durand Scott has been selected ACC Rookie of the Week for the second time this season.

The 6-3 freshman from New York City was among five Hurricanes to score in double figures in last Monday’s 80-59 win over North Carolina A&T.

Scott had 13 points, five rebounds and four assists in the 21-point win that extended Miami’s win streak to four straight, improving to 12-1 on the season. Scott – the first Hurricane to earn ACC Rookie of the Week honors twice in a season – ranks fifth in the ACC in assists-to-turnover ratio (2.07:1), eighth in assists (4.3) and is tied for 10th in steals (1.5).

Maryland’s Greivis Vasquez was named ACC Player of the Week after averaging 26.5 points, 8.0 rebounds and 8.0 assists in wins over Winston-Salem State and Florida Atlantic.