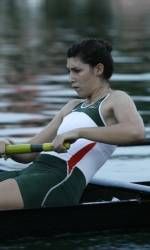 UM started off the day with a win in the Varsity Eight as coxswain Christina Crocco called the `Canes to the win with a time of 15:41.6. Laura Cordner served as stroke while the bow was manned by Monika Sajincic.

Behind the `Canes in second place was Barry (16:35.4), followed by the Miami `B’ crew in third (17:09.6). The Miami `B’ team was led by coxswain Shira Kharrazi, bow of Stacey Kerr and the stroke of Caitlin Augustin.

“It was great to be able to race at home, and there was a surprisingly large crowd on the banks of the Indian Creek and along the bridges,” expressed head coach Robbie Tenenbaum.

The day continued with Miami taking top honors in the Varsity Fours as the Hurricanes posted a time of 14:34.4. That team was served by the coxswain of Alexa Romero. The `B’ team finished third with a mark of 15:13.4.

The `B’ team was served by the stroke of Rachael Sporko and the bow was headed by Lizzy Elner.

“I was pleased with our performance today, but our team knows that we still have a lot of work to do,” admits Tenenbaum. “We were able to notice some weaknesses today, and will work on them in the next few weeks before we race at the Rivanna Romp on November 16.”

In small boat action, Miami came away with a first place time in the 2X as the duo of Alexa McCanick and Monika Sajincic finished with a time of 15:53.3. Meanwhile, Tara Eddings finished atop other races in singles action as she collected a time of 18:16.2.

Miami gets back to action on Nov. 16 when they travel to the Rivanna Romp in Charlottesville, Virginia.