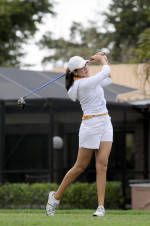 Sophomore Maria Ronderos and freshman Jennifer Hirano each fired a five-over par 76 in the final round Tuesday to finish in the top 25 and the University of Miami women’s golf team finished 12th at the 2008 UNCG Starmount Fall Classic hosted by the University of North Carolina-Greensboro at the Starmount Country Club.

For the second straight day, Miami had a solid showing posting a team score of 311. After shooting 39 on the front nine, Ronderos shot 37 on the back nine to finish the tournament 17-over par and tie for 22nd.

Freshman Jennifer Hirano equaled Ronderos with a five-over par 76 in her final round highlighted by shooting 36 in her first nine rounds. She also tied for 22nd place.

Sophomore Christina Hirano tied for 39th after shooting seven-over par 78 in the final round. She was 22-over par for the tournament.

Senior Anabelle Paulino shot 84 in her final round while freshman Begona Sarabia shot 81 on Tuesday.

Host team UNC Greensboro tied East Carolina for the team title as both teams shot 894 in the three-day tournament.

The Hurricanes compiled a team score of 937. The Hurricanes return to action next Sunday traveling to Greenville, N.C. to take part in the Lady Pirate Invitational hosted by East Carolina.