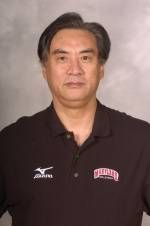 CORAL GABLES, Fla. – University of Miami head volleyball coach Nicole Lantagne Welch has announced the addition of Felix Hou to the volleyball coaching staff. With 20 years of coaching experience at the university, club and national levels, Hou brings a wealth of experience to the UM staff and is expected to have an immediate impact on a team that will return seven of its top eight offensive players for the 2008 season.

“We are extremely fortunate to add someone of Felix Hou’s caliber to our staff,” head coach Nicole Lantagne Welch said. “Felix is known as an incredible trainer in the gym and he has great mind for the game.”

“He played at the highest level internationally and has coached here in the US for the past 15 years, having great impact in both the programs he has been with,” Lantagne Welch added. “We are excited to have him join our Hurricane program and help us achieve new heights nationally and in the ACC.”

While at Maryland, Hou served as an assistant under legendary head coach Janice Kruger, the ACC’s all-time winningest coach in league history and former coach of Lantagne Welch in her playing days at Maryland. In Hou’s first stint under Kruger from 1995-98, the Terrapins went a combined 89-32, winning the ACC Championship once and making three consecutive trips to the second round of the NCAA Tournament. With Hou’s assistance, the 1997 team finished the regular season with a perfect mark of 25-0.

While at UMBC, Hou was named the 2000 Northeast Conference Coach of the Year after leading the Retrievers to a 19-13 record and a regular-season NEC Championship that year. UMBC went a combined 69-52 overall and 32-5 in conference play under the direction of Hou.

Prior to his arrival at Maryland in 1995, Hou spent two years as the assistant coach for the Yohan women’s volleyball professional team in Hong Kong in addition to serving as the coach for Iceland’s national team and the men’s and women’s teams at Iceland University. Before moving to Iceland, he coached the Chinese national women’s youth team, and the Beijing women’s team. As a coach, Hou delivered seven players to the Chinese National Team, and six to the Icelandic National Team.

As a player, Hou played seven years for the Chinese National Team, including the 1980 team with would go undefeated in world competition but missed the 1980 Olympic Games only because of the country’s boycott at the time.

Hou earned a bachelor’s degree in coaching management from Shanghai Physical Education Institute in 1986. He has two daughters, Lucy and Mary.