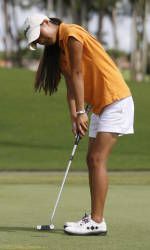 <?xml:namespace prefix=”st1″ ns=”urn:schemas-microsoft-com:office:smarttags”?>Kiawah Island, S.C. – The University of Miami’s women’s golf team finished in fifth place after the third round of the Cuthbert Cup was cancelled this afternoon due to inclement weather. <?xml:namespace prefix=”o” ns=”urn:schemas-microsoft-com:office:office”?>

Most of the teams had about four to six holes remaining when rain, mixed with thunder and lightning, set in for the afternoon. At approximately 2:00 p.m. the decision was made to call the round and use the second round results to declare the champions.

Christina Hirano finished in a tie for 10th place in the tournament. After a first-round three-under par 69 on Sunday, she shot a 79 for a total of 148 strokes.

Maria Ronderos shot a 77 on Monday for a two-round total of 149, placing her in 14th. Jessica Steward had the best second round for the Hurricanes, firing off a one-under-par 71, to finish in a tie for 22nd place (151), while Hagen Weintraub placed in a tie for 26th and Brook Stuart was 62nd.