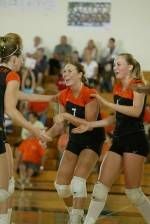 <?xml:namespace prefix=”st1″ ns=”urn:schemas-microsoft-com:office:smarttags”?>GREENSBORO, N.C. – Three University of Miami volleyball student-athletes were named to the 2007 All-ACC Academic Volleyball team, announced today by Atlantic Coast Conference Commissioner John D. Swofford. Senior Ciara Michel, junior Bridget Bomhack and freshman Maria Andersson were recognized along with 19 other student-athletes in the ACC for their accomplishments this past season.

Michel, a Psychology major, ended her career at UM as the program’s all-time blocks leader with 573 in her four seasons as a Hurricane. Bomhack, a Broadcasting major, ranked second on the team in kills (283), assists (149), digs (311) and total blocks (63) while Andersson, a Marketing major, finished her first season in Coral Gables ranking fourth on the team in kills (187), fifth in aces (19) and sixth in digs (195).

This year’s team includes at least one athlete from each of the league’s 12 member institutions. Michel, who was named to the 2006 All-ACC Academic team last season, is one of 17 repeat honorees.

Duke led all schools with five honorees this year, while Boston College, Clemson, Georgia Tech, Maryland, North Carolina and Virginia Tech join Miami in having three student-athletes named to the team.  Virginia and WakeForest each claim two team members, while FloridaState and NC State had one each.

Maryland’s Beth Gillming, Virginia’s Kirkwood, WakeForest’s Mullikin and Georgia Tech’s Stegemann join the team as three-time honorees, each having been a part of the inaugural All-ACC Academic Volleyball team for 2005.