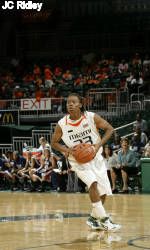 No. 5 Maryland Too Much for Miami

The <?xml:namespace prefix=”st1″ ns=”urn:schemas-microsoft-com:office:smarttags”?>University of Miami women’s basketball team (8-13, 1-5) was unable to keep up with the powerful No. 5 University of Maryland Terrapins (23-2, 7-1) as they fell 90-50 at the ComcastCenter.<?xml:namespace prefix=”o” ns=”urn:schemas-microsoft-com:office:office”?>

The Hurricanes needed to keep the game close in order to pull of the upset and for the opening 10 minutes of the game, they did.  However, after that point Miami quickly found themselves in foul trouble as starters Maurita Reid and Carla Williams each picked up their second infractions.

Maryland’s National Player of the Year candidate Crystal Langhorne took advantage of the Hurricane fouls as she was 9-9 at the free-throw line after only 12 minutes of play.  The senior ended the night with a game-high 19 points.

For Miami, Maurita Reid once again led her team in scoring with 15 points, but she was limited to only 22 minutes of playing time due to the early foul trouble.

The half-time lead was 21 points for Maryland at 44-23, and in the second half the Hurricanes were unable to slow down the Terrapins.

Reid was the only Miami player to score in double figures, while Maryland had four, as Langhorne, Marah Strickland (14), Laura Harper (13) and Marissa Coleman (12).

The Hurricanes will remain on the road as they face BostonCollege this Sunday at 2 p.m. in Chestnut Hill, Mass.