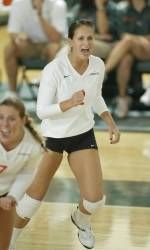 CORAL GABLES, Fla.-The University of Miami volleyball team closed out its 2007 season on a strong note, defeating N.C. State, 3-0, Friday on Senior Day at the Knight Sports Complex to end the season with two convincing wins at home after also shutting out North Carolina on Wednesday.

“I am pleased that the seniors were able to finish with a week like this,” head coach Nicole Lantagne Welch said. “I thought we had two really good back-to-back performances.”

Seniors Michelle Bruin and Ciara Michel each had big days in their final match at UM with Bruin recording 14 digs, her third-highest mark of the season, and Michel recording nine kills and three block assists.

“They both contributed significantly today,” Lantagne Welch said. “They have done so much for us over the past four years and it’s always hard to say goodbye. It has been a special time with them in the four years they have been a part of our program.”

In recording her 12th dig of the night, Bruin reached the 200 mark on the season, the third-straight year she reached the milestone.

The Hurricanes end the season with a mark of 14-17 overall and 8-14 in Atlantic Coast Conference play. The Wolfpack end the season winless in league action at 0-22 while going just 3-29 overall.

Miami was led offensively by Bridget Bomhack and Genny Mayhew as each player finished with a match-high13 kills. Bomhack led the team with a .391 hitting percentage, committing just four errors in 23 attempts on the afternoon. Katie Gallagher just missed the 50-assist mark, finishing with 48 in addition to adding six kills, two aces and four digs. Cassie Loessberg paced three Hurricanes in double-figure digs in tallying 17. Bomhack completed her second double-double of the week in adding 11 digs to her 13 kills.

The `Canes opened the match with a 30-26 game one win behind five kills from Bomhack, 18 assists from Gallagher and seven digs from Bruin. After the teams were knotted at five, UM went on a 12-5 run to go up 17-10. From there, the Hurricanes would go up 25-15 and eventually hang on for the four-point win.

The Wolfpack played their best game in the third but UM prevailed in the end with a 32-30 game three win. N.C. State got out to a 15-10 lead midway through the game but Miami would win eight of the next 11 points to tie it up at 18 all. Momentum would swing back and forth in the final portion of the game and after the teams evened it up at 30, two straight errors by the Wolfpack gave the game and the match to the Hurricanes. Wallace and Mayhew each had seven kills in the game while Loessberg and Bomhack combined on nine digs.