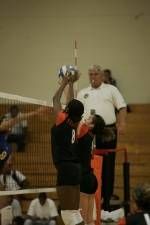 CORAL GABLES, Fla.- The University of Miami volleyball team tied a school record with 14 total team blocks in a three-game match as the Hurricanes shutout North Carolina, 3-0, Wednesday afternoon at the Knight Sports Complex in the first of UM’s final two matches this season.

“I thought we played a great match today,” head coach Nicole Lantagne Welch. “We really made some improvements on some things we’ve been working on with our blocking. We were able to shut them down at the net and that had huge impact on the outcome.”

UM improved its record to 13-17 overall and 7-14 in Atlantic Coast Conference play while the Tar Heels fall to 15-15 on the season and 11-10 in league competition.

“We served tough, we were able to get them out of rhythm a bit and our blocks set up nicely,” Lantagne Welch said. “We did a good job of getting over and causing them fits and behind that, our defense was able to dig a lot of balls. Good things happen when you play that kind of defense.”

As a result of Miami’s defensive efforts, the `Canes were able to hold UNC to a .084 team-attack percentage, with just one Tar Heel hitting above .300 on the afternoon. Conversely, Miami hit .281, its third-highest mark of the season. Gallagher led the way with four kills on six assists without committing an error but the duo of Bomhack and Ellis had a greater impact on the outcome, combining on 16 kills while committing just three errors in 41 attempts.

In fact, Bomhack finished with one of her best matches this season, recording a team-best 12 kills and 12 digs en route to her seventh double-double on the season. She also chipped in with four assists, four block assists and an ace.

Andersson and Genny Mayhew also finished in double-digit kills with 11 apiece. Cassie Loessberg had 11 digs while Gallagher finished with 10 in addition to her 36 assists on the offensive end.

Miami opened the match with a 30-25 win in game one. Six different Hurricanes tallied multiple kills with Bomhack and Mayhew leading the way with six apiece. Bomhack also led the charge defensively for UM, tallying six of the team’s 21 game one digs. UNC struggled out the gate, hitting just .062 in the game.

The `Canes went up 2-0 in the match in cruising to a 30-18 game-two win. Miami out-hit the Tar Heels in the game, .486-to-.143 with Mayhew setting the tone with a game-high six kills on 10 attempts without committing an error. The Hurricanes also used five total team blocks to just one for UNC to control the outcome.

The Hurricanes will take Thanksgiving Day off before returning to the court Friday at 1 p.m. when they host N.C. State in the season-finale for both teams. Prior to the match against the Wolfpack, seniors Michelle Bruin and Ciara Michel will be honored before they play their final match at UM.