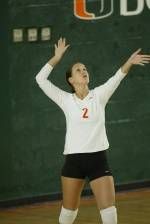 CORAL GABLES, Fla. – University of Miami defensive specialist Michelle Bruin has been named to the ESPN The Magazine Academic All-District Volleyball Team for the third time in her career as announced by the College Sports Information Directors of America (CoSIDA).

Bruin, a senior from Chapel Hill, N.C., has been named to the third team for the second consecutive year after serving on the second team in 2005.

“This is a great honor for Michelle,” head coach Nicole Lantagne Welch said. “She is a player who is truly both a student and an athlete. This award shows her hard work and dedication in the classroom is as evident as her play on the court for us over the years.”

Having completed her degree in Sport Administration in three years, Bruin is currently worked towards a second degree in the College of Arts and Sciences. She is also a three-time Academic Honor Roll member at UM, a two-time All-ACC Academic Volleyball Team member and a two-time member of the President’s Honor Roll, awarded to students who achieve a 4.0 grade point average.

On the court, Bruin currently ranks fifth on the team with 185 digs this season. In her career, Bruin has tallied 616 digs, 97 assists and 31 aces.

She owns a cumulative GPA of 3.881 through her first six semesters at UM.

The UM volleyball team will wrap up its season this week at home with matches against North Carolina Wednesday, Nov. 21 at 4 p.m. and N.C. State Friday, Nov. 23 at 1 p.m. Bruin and fellow senior Ciara Michel will be honored prior to Friday’s match as a part of 2007 Senior Day at the Knight Sports Complex.