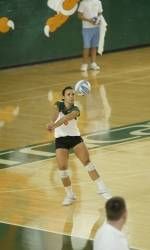 CLEMSON, S.C. – The University of Miami volleyball team lost to Atlantic Coast Conference leader Clemson University, 3-0, Thursday night at Jervey Gym. In the loss, sophomore libero Cassie Loessberg recorded a match-high 23 digs and in doing so, became the school’s single-season dig leader, passing Jamie Grass’s 2002 mark of 499 digs when she recorded her eighth dig of the night against the Tigers.

Loessberg, who finished the night with 515 digs on the season, recorded her record-setting 500th dig early in the second game.

“Jamie Grass definitely set the standard when it came to passing and defense and it is quite an honor for Cassie,” head coach Nicole Lantagne Welch said. “We hope that as she is able to work towards breaking her own record again before her career at UM is over.”

“We played a pretty good match but when you’re going up against the league’s top team, you’ve got to play great and take advantage of every opportunity,” Lantagne Welch said. “We were able to get a lot of digs but we weren’t able to convert them into points when we needed to.”

The two teams battled back and forth throughout the first game and after the two teams were knotted at 26, Clemson was able to take four of the next six points to go up 1-0. Clemson went up 12-4 early on in the second game and wouldn’t look back, pulling away for the 30-22 game two win to go up 2-0. In the third and final game, after the score was tied at 15-15, Clemson was able to stay a step ahead of the `Canes before eventually pulling away for the 30-26 game three win.

The `Canes will now make the short trip southwest to Atlanta to take on Georgia Tech Saturday, Nov. 16 at 7 p.m. The match will be broadcast live via ACC Select at www.ACCSelect.com and can also be followed on GameTracker at www.hurricanesports.com.