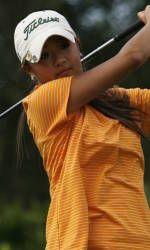 Kiawah Island, S.C. – Freshman Christina Hirano improved over each of three rounds to lead the University of Miami women’s golf team at the College of Charleston’s Edwin Watts/Palmetto Intercollegiate at the Oak Point Golf Club on Tuesday.

After shooting an opening-round 79, Hirano went on to shoot a 76 in the second round and a 73 in the third round to finish 36 holes of golf just 12 strokes over par with a score of 228 to tie for 11th place.

Senior Hagen Weintraub also showed improvement over the three rounds, finishing in a tie for 21st place firing off rounds of 81, 79 and 71 to finish with a 231 total.

Miami’s Jessica Steward and Marion Argi played three consistent rounds of golf. Steward finished in a tie for 74th after rounds of 84, 81 and 82 for a 247 total, while Argi recorded rounds of 84, 88 and 88 to finish with 260 strokes in 96th place.

The University of Miami women’s golf team returns to competition in the spring as hosts of the Papa John’s Collegiate in Miami Lakes from Feb. 16-18.