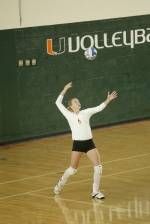 CORAL GABLES, Fla. – Four players finished with double-digit kills led by Genny Mayhew’s 17 and the Hurricanes out-hit Virginia, .202-to-.170 but it was not enough at the University of Miami fell to Virginia, 3-1, in Atlantic Coast Conference play at the Knight Sports Complex Friday night.

“I thought we put forth a strong effort and I thought it was a high-level volleyball match,” head coach Nicole Lantagne Welch said. “We made a good change at the break and came back serving tougher and passing better which allowed us to be more effective offensively. We just have to get tougher at the end and have one of those big plays go our way.”

In addition to Mayhew’s 17 kills, Ciara Michel finished with 14 while Bridget Bomhack and Angelica Ellis each recorded 10. Katie Gallagher reached the 50-assist mark for the sixth time this season and the second time in the last four matches in tallying exactly 50. She also picked up two kills, one ace, eight digs and three total blocks on the night.

“Katie really played another well, all-around match for us tonight,” Lantagne Welch said. “She did a great job of leading the offense and setting up our four players that finished with double-figure kills. I also thought Maria Andersson played well coming off the bench for us.”

Andersson collected five kills and recorded just one error offensively while contributing on the defensive side of the ball with three block assists. Michel led the team with five total blocks while Cassie Loessberg reached the 20-dig plateau for the third time in the last four matches, finished with 27.

Miami kept a slight lead throughout most of the first game before moving ahead 19-14 to force a UVa timeout. The Cavaliers picked up momentum from that point on though, winning 16 of the final 21 points to win 30-24. Mayhew finished with a game-high five kills for UM while Oakes and Voelker each had four.

UVa got out to an early 10-5 lead before going up 15-9 midway through the second game. The Cavaliers increased their lead to 10 at 24-14 before taking a 2-0 lead in the match with a 30-21 game two win. Mayhew added six more kills in game two but five Cavalier service aces and a combined 10 kills from Oakes, Kirkwood and Voekler were too much for the `Canes to overcome.

The Hurricanes started strong in game three, going up 8-4 before increasing their lead to 19-9, forcing a Virginia timeout. UM then went up 21-11 and after a brief 5-1 UVa run, the `Canes regained control to pull away for the 30-24 win. Michel and Mayhew each had four kills in the game while Loessberg also played well, collecting three aces and nine digs.

The `Canes will have a short turn-around before hosting Virginia Tech Saturday night at 7 p.m. in the Knight Sports Complex.