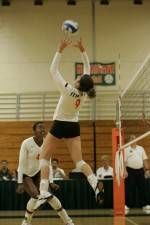 Ciara Michel led the Hurricanes in kills for the second time in the last three matches, finishing the night with 12, while Genny Mayhew and Bridget Bomhack added 11 and 10 respectively as UM falls to 9-12 overall and 3-9 in Atlantic Coast Conference play. Gallagher played one of her better all-around matches, collecting 32 assists, 11 digs, five aces, three kills and two total blocks but it wasn’t enough as FSU (9-11, 6-6) came away with their second win over the Hurricanes this season after defeating UM, 3-0, in Tallahassee, Sept. 14.

“We definitely competed a lot better tonight than we did when we played them in Tallahassee,” head coach Nicole Lantagne Welch said. “We had a lot of good things come out the match too. Our blocking is much improved and our offense looked decent when we were in system but the bottom line is their serving got tough and we allowed them to make too many runs.”

In addition to Gallagher’s defensive effort, Cassie Loessberg finished with 10 digs while Ariell Cooke and Ashley Woods each finished with four total blocks.

FSU took an early 9-6 lead in game one behind a couple of kills from Djuric. Miami won six of the next nine points to tie it up at 12 before the Seminoles were able to regain control, winning the next five points to go up 18-12 before a UM timeout. FSU retained the lead at 25-21 before a four-point UM run tied it up again. The two teams traded the next four points to knot it up at 27 before a Djuric ace and a Baker kill pushed the Seminoles’ lead to 29-27. UM won the next point on a FSU service error but came up short as FSU closed out the game with a Neville kill.

Miami won seven of the first eight game-two points before an FSU timeout stopped the action with UM up 7-1. Florida State then proceeded to win nine of the next 13 points to cut the lead to 11-10. Florida State took its first lead of the game at 16-15 and shortly thereafter moved ahead 22-19 forcing a Miami timeout. Momentum stayed with the Seminoles when action resumed as they pulled away for the 30-24 win in game two.

The Hurricanes got out to an early lead for the second consecutive game, going up 8-3 early and kept a comfortable lead throughout the game, leading 20-16 and 25-19 before eventually winning game three, 30-25. Michel led the way offensively for UM, recording six kills in the game while Bomhack chipped in with four. Gallagher also had a big game with 11 assists, four digs, three aces and a block assist.

UM kept the momentum in game four, winning six of the first nine points before FSU won four straight to take a 7-6 advantage. The Seminoles’ lead would increase from there to 15-10 and their five-point lead would remain at 20-15 before they eventually pulled away to claim the victory with a 30-23 game-four win.

Miami will remain at home this weekend as Virginia and Virginia Tech visit the Knight Sports Complex. The Hurricanes will host the Cavaliers Friday, Oct. 26 at 7 p.m. before facing the Hokies Saturday, Oct. 27 at 7 p.m.