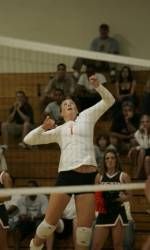 Mayhew, in addition to her 16 kills, finished with seven digs and two block assists. Bridget Bomhack had a solid night across the board, recording seven kills, five assists, eight digs and three block assists. Ciara Michel led the UM defense at the net, tallying one solo block and eight block assists while Cassie Loessberg’s finished with a match-high 17 digs. Maria Andersson nearly missed a double-double, collecting eight kills and 10 digs while Angelica Ellis had an efficient night offensively, recording four kills on seven attempts in hitting a team-best .429.

Johnson and Williams accounted for over half of the team’s 54 kills on the night. Brittany Pierpont ran the BC offense with 40 assists and was on of two Eagles to reach double-figure digs, finishing with 11. Cathy Quilco led the team with 14 digs while Abigail Hasebroock and Melanie Cimino had productive nights at the net with the duo recording five and four block assists respectively.

The `Canes will play their second match in as many days Saturday night when the team travels to College Park, Md. to take on the Maryland Terrapins at the Comcast Center Pavilion at 7 p.m.