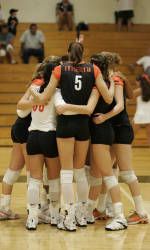 CORAL GABLES, Fla. – The Miami volleyball team hits the road this weekend after a four-match homestand when they travel to the Atlantic Coast Conference’s two northernmost campuses to take on Boston College Friday night at 5 p.m. and Maryland Saturday night at 7 p.m.

The Hurricanes (8-8, 2-5 ACC) are looking to rebound after four straight losses at home to four of the league’s top five teams currently in Duke, Clemson, Georgia Tech and Wake Forest. ThenEagles (8-9, 2-5) share an identical league mark as UM and have also struggled as of late, dropping five of their last six matches, including consecutive 3-1 losses at Virginia and Virginia Tech this past weekend. The Terrapins (10-6, 2-5), who also sit three game under .500 in ACC action, have gone 2-2 the last two weeks with wins over North Carolina and N.C. State two weeks ago before also falling to the Hokies and the Cavaliers over the weekend.

“Going up against B.C. and Maryland, we know we’re facing really strong defensive teams,” head coach Nicole Lantagne Welch said. “B.C. has been known to dig a lot of balls and Maryland is a good blocking team so we’ll definitely have to have patience on the offensive end and stay in rhythm.”

Despite the `Canes struggles the past two weeks, Genny Mayhew continues to elevate her performances in league play, averaging 4.15 kills per game and 15.43 kills per match through seven ACC matches after averaging 3.21 per game and 12.11 per match in non-conference action. Ciara Michel and Ashley Woods join Mayhew offensively having recorded 65 and 49 kills in league play while Michel’s .268 hitting percentage in ACC play leads the team just ahead of Woods’ .254.

The Eagles offense runs through Kelsey Johnson, whose 3.98 kills per game average is more than a kill better than BC’s second and third leading attackers in Audrey Eichler (2.81) and Abigail Hasebroock (2.39). Johnson, who ranks in a tie for second on the team with 109 digs, leads three Eagles with at least 20 aces, tallying 23 thus far. Eichler tops all BC attackers with a .255 hitting percentage while ranking second in total blocks (52). Brittany Pierpont and Dani Moskitis split the setting duties with Pierpont averaging 10.10 assists per game and Moskitis averaging 4.66. Cathy Quilico leads the defense with 234 digs (4.03 dpg) while Hasebroock is BC’s top defender at the net with 65 total blocks.

About Maryland
Beth Gillming leads five Terrapins in triple-figure kills with 193 (3.06 kpg) thus far while Katie Usher (132 kills) leads the team and ranks sixth in the ACC with a .353 attack percentage. Hayley Hanson and Rachel Profit currently share the setting duties with 373 and 228 assists respectively this season while Hanson also leads the club with 15 service aces. Defensively for Maryland, Gillming and Maggie Schmelzle have combined for 456 of the team’s 1,109 digs through the first 16 matches while Jade Brown ranks second in the league with a 1.57 blocks per game average.