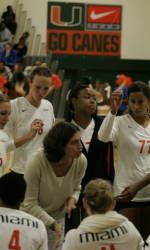 Volleyball Preparing For Another ACC Weekend At Home

CORAL GABLES, Fla. – UM volleyball returns to the court this weekend against two of the ACC’s top teams in Clemson and Georgia Tech at the Knight Sports Complex. The Hurricanes will take on current ACC leader Clemson Friday, Oct. 5 at 7 p.m. before taking on the league’s preseason No. 2 team in Georgia Tech Sunday, Oct. 7 at 12 p.m.

The `Canes (8-6, 2-3 ACC) come into the weekend having split their last four league matches, defeating Virginia Tech and Virginia two weeks ago on the road before dropping matches to Wake Forest and Duke this past weekend in Coral Gables. The Tigers enter the weekend with a perfect 5-0 record in league play and a 10-3 mark overall, having won seven matches in a row while the Yellow Jackets are 9-5 overall and 3-1 in ACC play, going 3-2 in their last five matches.

“We have some tough competition coming to our gym this week but we expect to play much sharper than we did a week ago,” head coach Nicole Lantagne Welch said. “We’ve really focused on doing a better job defensively and that starts at the net with our blocking but more importantly we are working on covering more ground in the backcourt.”

Genny Mayhew has carried the UM offense through the season’s first half and has been performing at an even higher level in ACC play. Mayhew averaged 3.21 kills per game through UM’s first nine non-conference matches and since league play began for the `Canes Sept. 14 at Florida State, Mayhew has increased her scoring average by over a kill per game, averaging 4.32 per game through the first five ACC matches. Ciara Michel has also been more effective offensively for Miami as of late, hitting .312 in league play after a .228 percentage in non-conference action.

Katie Gallagher continues to be ranked among the nation’s elite in serving, averaging 0.70 assists per game, the 10th-highest mark in the country. She also ranks fifth in the ACC with a 10.57 assists per game average.

Sunday’s match against Georgia Tech will be broadcast live via ACC Select at www.ACCSelect.com. The match has also been tabbed a “Dig for the Cure” match in which fans can pledge money to the Susan G. Komen Breast Cancer Foundation for every dig recorded by the `Canes against the Yellow Jackets.

About Clemson
Five Tigers account for 93 percent of Clemson’s kill total, with the group recording 699 of the team’s 750 kills. In addition to Danielle Hepburn’s team-high 166 kills, Jeannette Abbott (155), Meghan Steiner (139), Lia Proctor (134) and Leslie Mansfield (105) have been the top hitters on the team but setter Kelsey Murphy, who has just nine kills in nine non-conference matches, already has 16 in four ACC matches. Murphy ranks second in the league in assists per game (11.93) while also ranking second on the team with 175 digs. Didem Ege leads the league with a 5.71 digs per game average while Hepburn and Steiner have 60 and 45 total blocks respectively.

About Georgia Tech
The Yellow Jackets have four players with at least 100 kills led by Talisa Kellogg’s 199 and Ulrike Stegemann’s 161. Kellogg, who is tied for second on the team with 12 total blocks in ACC play, has 33 total blocks on the year in addition to 91 digs. Nikki Kaminskas is the top player at the net for GT, leading the team in total blocks on the season (48) and in conference play (16). Also on defensive front for the Yellow Jackets, Michelle Kendall and Lindsey Gray have tallied 258 and 140 digs respectively, accounting for nearly half of the team’s total digs. Mary Ashley Tippins leads the club with 514 assists (10.08 apg) with Allie Niekamp also chipping in with 176 thus far.

Fans can follow both matches via GameTracker at www.hurricanesports.com. To access GameTracker, visit the team’s schedule on the Miami volleyball page. The Hurricanes match Friday night against Clemson can be heard live on the University’s student network WVUM 90.5 FM. For tickets, contact the Hurricane ticket office at 1-800-GO-CANES.

If you are interested in making a donation towards “Dig for the Cure” or would like more information about the event, call the Miami volleyball office at (305) 284-4532 or email assistant coach Matt Botsford at mbotsford@miami.edu.