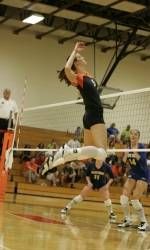 CORAL GABLES, Fla. – Miami volleyball dropped its ACC home-opener Friday night to Wake Forest, 3-0, in front of a full house at the Knight Sports Complex. Genny Mayhew and Ciara Michel each had 10 kills for UM while Ashley Woods hit a team-best .421 as the `Canes fell to 8-5 overall and 2-2 in ACC action.

“We had some nice runs and some nice stretches but we just weren’t able to sustain it for an entire game,” head coach Nicole Lantagne Welch said.

Michel and Genny Mayhew combined on 20 of the team’s 45 kills while Woods recorded nine kills while committing just one error on 19 attempts. Katie Gallagher recorded 31 assists while Michelle Bruin and Bridget Bomhack each contributed with three apiece.

“It was disappointing to have an off-night with the atmosphere we had in here tonight,” Lantagne Welch said. “It was a great environment, the crowd was loud and I just wished we would have shown them more out there.”

Mayhew was the lone Hurricane to reach double-figure digs with 10 while Cassie Loessberg and Maria Andersson finished with nine and eight respectively. Andersson also finished with eight kills on the offensive end, her highest total since recording 11 kills at Marquette on Aug. 31. As a team, UM finished with just five total team blocks.

Kristen White finished with a match-high 14 kills for Wake Forest while Natalie Mullikin (12) and Michael Faulkner (11) also finished in double-figures. Kelsey Jones led the offense with 41 digs and Mullikin led the Demon Deacons at the net with 7 total blocks. Wake Forest out-hit Miami .298-to-.175 for the match.

The Demon Deacons (6-7, 3-1 ACC) opened the first game with a13-3 lead before the `Canes batted back to within six at 21-15. From there, UM was unable to move any closer as the game moved on and Wake Forest pulled away for the early 30-18 win. The Demon Deacons out-hit the Hurricanes .400-to-.077 while also tallying seven total team blocks.

In game two, Wake Forest got out to an early 5-2 lead before Miami won seven of the next nine points to gain an early 9-7 advantage. The two teams were knotted at 11 before the Demon Deacons regained the lead with a 11-6 run of their own before eventually prevailing 30-25 to take a 2-0 lead. For Wake Forest, Abby Miller had eight of her match-high 15 digs in the game while Mayhew lead the `Canes with five kills in the game.

Wake Forest established another early lead in game three, gaining a 6-2 edge before UM won six straight to take a two-point lead. The Deacons would go up 20-15 heading into the latter part of the third game before a 5-0 Miami run tied it up at 20-20. From there, Wake Forest pulled away to claim the victory with a 30-26 game three win.

UM will return to the court Sunday afternoon at 12 p.m. when the `Canes take on the nationally-ranked Duke Blue Devils at the Knight Sports Complex. Fans can follow the via GameTracker at www.hurricanesports.com. To access GameTracker, visit the team’s schedule on the Miami volleyball page. For tickets, contact the Hurricane ticket office at 1-800-GO-CANES.