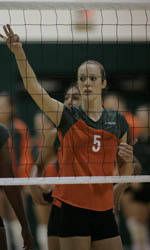 Charlottesville, Va. –The University of Miami volleyball team won its second ACC match in as many nights as Genny Mayhew and Ciara Michel combined for 45 kills to give the Hurricanes a 3-2 win over Virginia Friday night at Memorial Gymnasium.

“Our team stayed composed throughout the entire match,” head coach Nicole Lantagne Welch said. “It was really a hard fought match and I’m proud of the way our team battled to pick up a couple five-game wins in back-to-back nights on the road.”

Mayhew led Miami (8-4, 2-1 ACC) with 25 kills, nearly matching her career-best 26 kills set Thursday night in Blacksburg against Virginia Tech. In addition to her contributions offensively, Mayhew finished with a career-high 20 digs while Cassie Loessberg led the team with 23 on the night.

“Genny Mayhew backed up a great match last night with another huge performance for us tonight,” Lantagne Welch said. “She has really stepped up her game this week and it has made a difference in our play.”

Michel, in addition to recording a season-high 20 kills, also played her best defensive match of the season with 11 total blocks on the night.

“I thought Katie Gallagher had a really strong night,” Lantagne Welch said. “She did a good job of putting our attackers in some good positions to get solid swings all night.”

Bridget Bomhack had a productive all-around match for UM with 12 kills, 12 digs and five solo blocks.

The two teams battled back and forth in game one before Virginia edged out UM, 35-33. The `Canes bounced back with a close 30-28 win in game two before winning by the identical score in game three. Once up 2-1, UM lost the fourth game 30-27 before eventually prevailing in game five, 15-8.

The `Canes will return to the court Friday, Sept. 28, when the team returns home to face Wake Forest in UM’s first league match at the Knight Sports Complex. Fans can follow the match via GameTracker at www.hurricanesports.com. To access GameTracker, visit the team’s schedule on the Miami volleyball page. The match can also be seen live on ACC Select at www.ACCSelect.com and can be heard live on the University’s student network WVUM 90.5 FM.