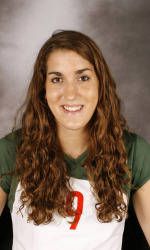 Coral Gables, Fla. (www. hurricanesports.com) – – Freshman setter Katie Gallagher has been named the Muscle Milk Student-Athlete of the Week for the period of Sept. 3-9, 2007.

Gallagher was named to the 2007 Hurricane Invitational All-Tournament Team after leading Miami to three straight sweeps over the weekend against Loyola, Brown and an undefeated Delaware team. She tallied 117 assists on the weekend (13.00 apg) with totals of 41 against both Loyola and Delaware and 35 versus Brown.

In addition to her setting contributions, Gallagher had a strong all-around weekend with eight kills, seven aces, 33 digs and six total blocks in UM’s three matches. Five of her seven aces came against Brown on Saturday, placing her in a tie for third in school history for aces in a single match.