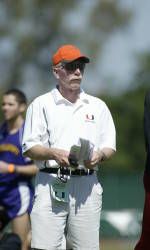 Editor’s Note: Kim Stabler is a University of Miami student in a sports writing class taught by Michelle Kaufman, sports writer for the Miami Herald.

Coral Gables, Fla. (www. hurricanesports.com) – – At the beginning of UM track and field practices, Mike Ward jokes around with the runners and talks to them about their family and what’s going on in their life. But when warm-ups are over, it’s down to business. His laid-back approach to coaching allows him to really get to know his athletes and be able to motivate them to do their personal best. “We joke a lot in warm-up, but once we start the workout it’s all different. If we’re not hitting the times, he gets on us, and if we are, he just motivates us to keep going,” said All-American Tim Harris. In his tenth season as the Men’s Track and Field Head Coach, Ward is nothing but humble about his accomplishments in and outside of track.

Coach Ward describes his coaching style as more mellow than it used to be. When he was younger, he would get more fired up, but as time has gone on he has learned to back up and teach his athletes to learn from themselves what they are doing wrong.

“Coaching is not a democratic process, it’s very authoritative. It’s we want you to do this. It’s not like, well I don’t think I’d like to do that today. If they don’t want to do it there’s no need for them to be here,” said Ward. And his runners know that’s what he is about. Middle Distance runner Richard Bernard described how he sees Coach Ward’s style. “I think track is a self motivating sport and he knows that. So he gives you your space, he knows that if you don’t want to be out here, you’re not going to be good,” said Bernard.

Ward got into track by playing football as a kid. When he beat everyone in distance running, he realized he was better at running than football. But coaching was never on Ward’s list of future goals. But when he worked as a therapist for a number of years and was a road racer, other people put the idea into his mind. “When I saw that opportunity to coach, especially in something I love to do, it was a no brainer,” said Ward.

Ward has not only coached track and field all-stars, but has coached some of the NFL’s biggest names, including UM alumni Santana Moss, Willis McGahee, Ed Reed, and this year’s Superbowl standouts, Devin Hester and Reggie Wayne.

In the 2006 season, Ward coached Tim Harris to the 800-meters ACC Indoor and Outdoor titles, as well as All-American honors. Miami finished ninth overall in the Indoor and Outdoor Championships and won three events, including Harris’ and Lance Leggett’s victory in the 400-meter hurdles. So far this season, Harris has again won the ACC Outdoor title for the 800-meters and Leggett placed second in the 60-meter hurdles. Ward’s goal for the 2007 season is high. “We want as many guys to win ACC Championships. We want as many guys to make All-American. We want to possibly win a national championship in an event,” he said.

Ward’s described his first year as the Head Coach as his proudest moment in track. “My first year as head coach, we went from 9th place in the Big East to runner-up and I won coach of the year there. But the team was a group of guys like Santana Moss, Reggie Wayne, guys that nobody knew about back then, they were just people coming out of high school. It was pretty special for them and myself to go from 9th to almost winning a championship as a group,” Ward said.

Some of Ward’s best runners, including Harris, Bernard, Thomas Berry, and Patrick O’Donnell, as well as some women he coaches, Ena Leufroy and Katie McInvale, describe Ward as “easy-going, laid-back, and easy to get along with.” However, Ward describes himself best as competitive. “I’m always competing, always trying to get better, and in running it’s a great sport because you can always get better,” Ward said.

Also a motivational guy, Ward tries different tactics each season to inspire his athletes to go above and beyond. “I like to read history stuff, survival stuff, you’re talking about people on the edge doing things they wouldn’t typically do and that’s what I’m looking for in my athletes- to do something beyond themselves,” said Ward. This season, he used a story about the man who cut his arm off when he was stuck in a mountain. “He gives you confidence in that there is a system. If you do what he says you’re going to run the result, if you don’t you won’t run the result,” said Berry.

Coach Ward has also been known for his athletes’ success in the classroom as well as on the track. In three of the last four seasons, Ward’s teams have been honored with All-American academic distinctions. In the 2006 season, UM was the only ACC team to be honored academically. Ward knows how important a college education is, especially for track and field athletes. “Basically in track and field, when you’re done with it here, you make it a hobby. One or two might go on to be pro, but it’s not like football where you have a whole bunch going pro and making big money. So, the education is significant because it’s going to dictate how you do the rest of your life,” Ward said.

Outside of track, Ward is most proud of and known for his dedication to his family, his wife Susan and son Brooks. Showing his love for running, Ward still runs himself and teaches others in the community besides students. “He has a running class outside for older people on Wednesday nights and coaches them,” said Bernard. “He’s pretty well known around here in the running community,” said Berry.

The laid-back and humble Mike Ward and the entire Men’s Track and Field team do not get near as much credit for their dedication to the sport, the hours of practice and travel they put in, and the number of awards and honors they have received since Ward turned the program around. He has been undoubtedly been instrumental to the recent success of the Track and Field program here at UM, as well as other professional athletes.