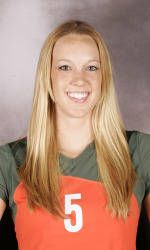 Miami along with Boston College, Florida State, Maryland, Virginia Tech and Wake Forest each had one selection, while Clemson and Virginia both received three picks, and Georgia Tech placed two members on the All-Conference teams.

Michel, a middle blocker from Miami, Fla., finished the season with the most blocks in a single season by a Miami player with 168 and ranked fourth in the league in blocks with a 1.41 average. She holds the Miami all-time block assists record with 344, and set a new Miami record for block solos in a season with 39 this year. Michel had a personal best 129 block assists this year which is the second best all-time single season total in school history.

Her .299 hitting percentage during the 2006 season ranked ninth in the ACC.

The Hurricanes wrapped-up the season with a 9-13 conference record and finished the year 12-19 overall.