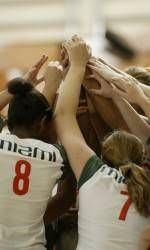 Hurricanes Take the Seminoles Down in Five Games

After being down two games, the Hurricanes came back with a vengeance to blow through the next three in front of a live broadcast on Sun Sports Television Network, along with a hostile Florida State crowd.

“I am really proud of the way the team stayed composed after getting beat in the first two [games]”, commented head coach Nicole Lantagne Welch. “We responded with heart and execution, by sticking to our game plan and made some key changes”.

Just shy of 12 kills, junior middle blocker Ciara Michel eclipsed her career high of 209 kills by posting a total of 13 against the Seminoles. She also led the team in blocks with four total.

“Ciara has had a great season for us, and she’s been very consistent. It’s not surprising that she’s pass that mark”.

“Frannie hit very well for us on the outside. She moved the ball around so much tonight and that really made her affective.

As a team, the Hurricanes out-dug FSU by putting up 51 total digs and were four kills behind the Seminoles with 63 total. Miami had a hitting percentage of .206 and tallied 13 total blocks.

In game one, the Hurricanes came out on the board first with a solid kill by Genny Mayhew. The Seminoles tried to keep up the Hurricanes after kill by Makini Thompson put the match within one at 4-5. The Hurricanes went on a four-point streak which included three errors by the Seminoles and a kill by the Canes, putting Miami up with an early five-point lead at 9-4. But the Seminoles rallied back to tie the match at 11 all. After both teams went back and forth Ciara Michel chipped in her first kill of the night, putting the Canes up by two at 15-13, it forced Florida Sate to take the first match time-out. The Seminoles came right back to post the next score off of a UM service error. The next attack error from Savage gave FSU the edge to tie the game at 16-all, where they eventually took their first lead off a kill by Malorie Wessel, to put the score at 19-17. Down the stretch, Miami takes a timeout down by six, and FSU’s largest lead, with the score at 21-27. Miami began to rally back when three back-to-back attack errors from Wessel and Alex Plummer put the Hurricanes within two at 29-27. But a kill from the Seminoles’ Malorie Wessel gave FSU a 30-27 win and a 1-0 game lead. Robinson registered all eight of the Hurricanes’ assists, while Ashley Woods posted three kills.

The Seminoles came out with an early 17-7 lead in game two, and never looked back. Despite being down, Frannie Savage led with 6 kills to keep Miami in the game. The Hurricanes were down 26-9 and did not score at the 10 point mark until three kills off of Sarah Duncan, Frannie Savage powered over a block, and the Seminoles posted an attack error Hurricanes rallied back with a five point run to put the game at 26-14. By the end Savage stepped in to post the next two Hurricane points. Despite kicking into high gear, Miami could not close the score gap and went down 0-2 in the second game with the score at 30-16.

“The first two games we were struggling with our passing”, Lantagne Welch stated. “The emphasis during the [timeout] was that we had to serve tougher and take care of the ball on our side, and we did exactly that”.

“Michelle Bruin, Ann Gallo, and Cassie Loessberg were all tremendous for us throughout the match. That made a huge difference. We were also very aggressive with our serving, which caused some problems on their end”.

The Hurricanes took to the court with an early 15-12 lead in game three, registered a total of 17 kills and capitalized on all seven of the Seminole’s attack errors, before taking the game at 30-22. The match went back and forth, however, Miami controlled the pace of the game posting back-to-back kills, and seeing a solid performance by sophomore Angelica Ellis who contributed five kills and Lauren Rinderknecht posted key blocks. FSU’s last offensive point came off of a kill by Sara Griffen at 22-26. But that could not stop the Hurricanes from scoring the last four points and go on to take their first game win at 30-22.

“Angellica Ellis attacked very well tonight, and it was great to see her step up with a competitive edge for us”, stated Lantagne Welch. “Lauren came in on the right side and provided us with some key blocks, and really help things to put a stop on their offense”.

Game four, the Hurricanes came out with a great deal of intensity to take an early 15-7 lead. The Seminoles went on to post the next four points of four back-to-back Miami attack errors. Jill Robinson came up with a solid solo block to put the Canes up 26-21. But the Seminoles rallied to put the game within one at 27-28. Miami stayed ahead with match point 29-28. Both teams competed with immense energy to take the game, but the Seminoles could not break even after posting an attack error by Malorie Wessel, causing Miami to take the game 30-28, and tied the match 2-2.

In the fifth and deciding game, it was a hard fought battle between both squads. Miami took the 8-4 lead right before the two teams swapped sides. The Seminoles came back onto the floor posting the next four points tying the game at 8-all, forcing Miami to take their final timeout. Back on the court, Ciara Michel responded with a kill that the Seminoles never saw coming. The Hurricanes had gone on a 6-point run all the way up to a match-point at 14-8. But one last kill by Jessica Skower kept the Seminoles in the game. A service error by Skower gave Miami the final point they needed to take the 15-9 win and the match victory.

The Hurricanes will return back the Knight Sports Complex Friday to take on Duke University, who stand at number one in the ACC. The match will begin at 7:00 p.m.