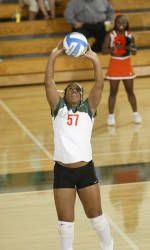 Women's Volleyball Head out on the Road to Face Virginia and Virginia Tech.

CORAL GABLES, FLa. – The University of Miami volleyball team look to jump back on an unbeaten path as the Hurricanes play a pair of matches this weekend. The Hurricanes, who are 6-10 on the season and 3-4 in ACC play face Virginia Friday, October 13 at 7:00 p.m. before going against Virginia Tech Saturday at 6:00 p.m.

The Hurricanes come into the weekend with a 6-10 mark following Sunday’s loss to UNC. Despite the defeat, Miami was led by senior setter Jill Robinson who posted her eighth double-double of the season with 36 assists and 10 digs. Since the beginning of ACC play, Robinson has registered a double-double against each conference opponent, all awhile setting a new school record.

With the 608 assists currently under her belt, Robinson has now surpassed the 4000 career assists mark with 4,323 assists, as the Hurricanes are well into the season and still have 13 matches left after this weekend. Last season, Jill Robinson reached a milestone in UM volleyball history as the only player to mark 3000 assists with a total of 3, 715.

Senior outside hitter Frannie Savage continues to dish out kills with 3.73 per game, leading the Hurricanes with 235 so far for the season. At this pace, Savage is just 249 kills shy of beating her career high of 483 total kills from last season.

Virginia – The Hurricanes head to Charlottesville to face the Cavaliers, ranked 19th in blocks (3.17 bpg), and stand 12-5 overall and 5-3 in the Atlantic Coast Conference.

Virginia is led by Katie Oaks four different categories – kills (201), attack percentage (.255), blocks (111) and points (274.5). She is also the nation’s leader in blocks per game with an average of 1.88. Second on the team with 183 kills is freshman Lauren Dickinson, while senior setter Emily Kirkwood is second on the Cavaliers squad in service aces with 20 and averages a team-best 12.73 assists per game.

Virginia will also look to getting back to a winning strategy as they come off of a two-match losing streak to ACC foe’s Duke (3-1) and Wake Forrest (3-0).

Virginia Tech – The Hokies are 10-7 overall and 4-4 in ACC conference play after going down three back-to-back matches against conference opponents Boston College (2-3), Wake Forest (2-3) and Duke (0-3).

Tech is led by Taylor Parrish who ranks eighth in the ACC with 233 kills and a 3.58 average. She posted a double-double against Wake Forest with 12 kills and a career-high 17 digs. Michelle Lang leads the Hokies in assists with 713 and 10.97 per game.