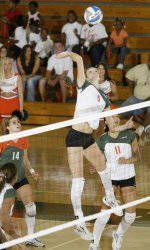 “I feel that Ciara has been more of a threat, and has taken her game to a whole new level,” commented Head Coach Nicole Lantagne Welch.

Game one saw eight tied scores and 12 lead changes. Florida State kept the score close trailing behind the Hurricanes by no more than three points. In the middle of the game, Miami lead 19-16 before the Seminoles went on a six point scoring drive. That did not, however, take away from the Hurricanes’ 5 point drive soon thereafter putting them up 24-21. The Seminoles tried to keep up with Miami, tying the score 25-all right before the Hurricanes pulled away with the 30-27 win. Duncan led the game with eight kills and posted two digs.

The second game began with UM jumping out to an early lead before the Seminoles tied the game 14 all, and captured their first lead after a kill by FSU’s middle blocker, Brianna Barry, putting the score at 15-14. Florida State went on a five point scoring run before they built a seven point lead, giving them the lead for good and a 30-24 win.

In game three, Miami led the entire way by as much as 10 points. The Hurricanes were led by Michel with five kills, and Robinson posting a game high 13 assists, earning Miami a 30-22 win.

The Seminoles jumped out to an early lead, taking the Hurricanes 11-4 in game four, capitalizing on Miami’s errors, and never looked back. FSU overpowered Miami, out-hitting the Hurricanes .368 to .223 to go on to a 30-12 win.

Florida State got on the board first, and took an early lead in the deciding game. The Hurricanes were able to tie the score at 5 all, before rallying back to capture their first lead at 10-8. FSU, however, responded by staying within one point of the Hurricanes tying the game 12 all. Miami could only stay to within three points, however, before FSU ran away with the game 12-15 and the match.

The Hurricanes return to ACC action at home this weekend as they take on Boston College, Friday Sept. 22 at 8 p.m., and Sunday Sept. 24 against Maryland at 1 p.m. at the Knight Sports Complex.