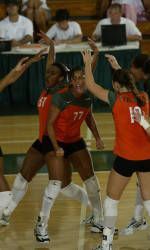 The Hurricanes, who have won three-straight matches and six of their last nine, avenged a five game loss at WakeForest earlier in the season.

“We lost a tight match to them up there, “said head coach Nicole Lantagne Welch. “This time we came out firing on all cylinders from start to finish. Last time we took a while to get going but we really started out strong this match.”

“We had a team pursuit defensively and posted some big blocks to create some separation,” added Lantagne Welch.

“Sara was outstanding for us attacking,” noted Lantagne Welch. “Francheska was also very effective in getting the ball and putting it away for us.”

The Hurricanes took control early in game one thanks to a .250 hitting percentage and 6-for-7 hitting by Savage. With the Hurricanes leading 18-11, the Demon Deacons tallied four-straight points to pull to within four but could not get any closer as the Hurricanes ran way with a 30-23 victory.

Game two saw WakeForest jump ahead to a 13-10 lead before Miami registered five-consecutive points to pull ahead 15-14. The Demon Deacons managed to tie the score at 16-all but the Hurricanes answered with a six point run where they capitalized on five Wake Forest errors to take a 21-16 lead. Though WakeForest notched three points with Miami at game point, the Hurricanes managed to hold the Demon Deacons off to claim the win, 30-26.

Game three was all Miami as the Hurricanes led by as many as nine points and hit .400 in the game. Miami used an 11-1 run to build its lead until finally running away with a 30-19 win and the match victory.

The Hurricanes return to action Friday for their final regular season match against Duke. Match time is set for 1:00 p.m. in the Knight Sports Complex. Prior to the match, the Hurricanes will honor senior captains Kaitlin Kozak and Karla Johnson who will be playing their final home match of their careers.