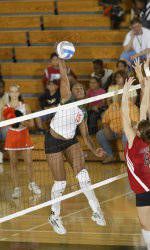 “I can’t say enough about Karla, ” said head coach Nicole Lantagne Welch. “She is just a pleasure to coach. She does it all. She had an outstanding match tonight where she etched her name in the record books. I think that’s a tribute to all the she’s done and is very well deserved.”

Savage matched a personal-best with 23 kills while Kaitlin Kozak set a career-high with four service aces to lead all players.

“We knew that our backs were against the wall and knew that we had to make a significant change in our play if we wanted to make something out of this match,” saidLantange Welch.

“They really started playing great as a team and it started with our defense. Our blocking and back court defense was what turned around the match.”

Down 2-0 after the break, the Hurricanes took control early in game three effectively taking a 7-3 lead. The Tar Heels took an 11-9 lead, thanks to a 7-0 run, but a couple points later the Hurricanes answered with a 7-0 run of their own to go up 15-14. Both teams then battled point-for-point, tying the game on nine occasions until with the scored tied at 22-all, Johnson knocked down a kill to give Miami up for good. The Tar Heels could only summon three more points as the Hurricanes claimed the game, 30-25.

Miami dominated the fourth game as the Hurricanes jumped ahead 14-7. Miami kept North Carolina off-balance holding the Tar Heels to a -.043 hitting percentage while hitting .341 to run away with a 30-18 victory that forced a fifth and deciding game.

Game five was all Savage as the redshirt junior went a perfect 5-for-5 and accounted for seven of Miami’s 15 points in the game. The Tar Heels tallied the first point before Robinson got behind the line for 14 consecutive serves. With the Hurricanes at game point, 14-1, the Tar Heels got on the board but Savage scorched another kill to give Miami a 15-2 win and the match victory.

The Hurricanes registered a .615 hitting percentage in the game while holding the Tar Heels to a -.250 and only two kills.

The Hurricanes return to action Sunday when they host NC State at the Knight Sports Complex. Match-time is set for 1:00 p.m. and can be heard live on www.WVUM.org or 90.5 FM. Fans can also follow the match on the web via live stats on www.hurricanesports.com.