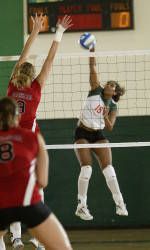 The match opened up with a point-for-point battle that saw the score get knotted up 17 times with three lead changes. The Hurricanes eventually took a 16-14 lead only to see the Terps battle back to take a 21-20 lead of their own. Maryland extended its lead with four-straight points to gain a 20-23 advantage. The Terps maintained their lead until the Hurricanes used an Angelica Ellis kill to tie the score at 26-all. But Miami could only notch another point after that as Maryland claimed a 30-27 game one victory.

Game two had the makings of another close contest as, once again, both teams remained toe-to-toe until Maryland took a 10-7 lead. The Hurricanes fought to remain within two points but the Terps continued to add to their lead eventually jumping ahead by as many as five points. Miami would not be dismayed, however, as it used a four-point run to pull to within one point with the score 20-19. The Terps once again pulled away but the tide turned with the score at 28-24 as the Hurricanes used four straight points to tie the score at 28-all. Another battle ensued as the prolonged match was tied six more times and reached game point on six occasions. Johnson knocked down a kill to give Miami game point before a Terrapin attacking error eventually gave the Hurricanes a 36-34 victory.

Though Maryland got on the board first in game three, Miami took advantage of back-to-back Johnson kills to jump ahead 11-8. The Terps tied the score at 12-all but could not get any closer as the Hurricanes pulled away for a 30-26 win and a 2-1 match lead.

Maryland caught Miami off balance in game four as the Terrapins jumped to an 11-5 lead. The Hurricanes could not put a run together to solve the Terps as they ran away with a 30-22 victory to force a fifth and deciding game.

Miami jumped ahead 5-3 in game five before Maryland then tallied four consecutive points to take an 8-5 lead. Maryland continued to pile on the points and eventually claimed a 15-9 win and the match victory.

The Hurricanes return to action Sunday at noon when they host ACC foe BostonCollege at the Knight Sports Complex.