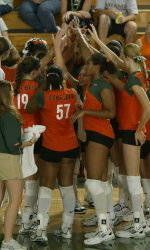 Miami Set to Host Maryland and Boston College This Weekend

CORAL GABLES, <?xml:namespace prefix=”st1″ ns=”urn:schemas-microsoft-com:office:smarttags”?>Fla. – After Hurricane Wilma forced the postponement of Tuesday’s match against FloridaState, the University of Miami volleyball team returns to action for the second half of Atlantic Coast Conference play when it hosts Maryland and BostonCollege this weekend. The Hurricanes will face the Terrapins Friday at 4:00 p.m. before squaring off against the Eagles at noon on Sunday. Both matches will be played at the Knight Sports Complex. <?xml:namespace prefix=”o” ns=”urn:schemas-microsoft-com:office:office”?>

Senior Karla Johnson was back to impressive form last weekend after posting 55 kills in nine games for a 6.11 kills per game average. In Miami’s match against WakeForest, Johnson’s 31 kills set a new record for kills in a match.

Johnson is currently leading the ACC and is ranked 13th in the nation with 5.10 kills per game. She also leads the team with 20 solo blocks and 30 service aces.

Redshirt junior Francheska Savage is also contributing offensively. She is ranked eighth in the ACC with 3.73 kills per game and leads the team with a .289 hitting percentage.

Redshirt sophomore Ciara Michel is also ranked eighth in the ACC with a team-leading 1.20 blocks per game average while junior Jill Robinson is third in the ACC with 12.30 assists per game.

Defensively, junior Ann Gallo leads the team with 3.80 digs per game, which ranks her 10th in the ACC.

Maryland: The Terrapins head into Coral Gables riding a six-match winning streak after enjoying wins against North Carolina (3-1) and NC State (3-0). Winners of 26 of their past 28 matches, the Terps sit atop the ACC with an 11-1 mark and are 20-1 overall with their only loss coming at the hands of Georgia Tech.

Maryland is currently ranked 18th in the RichKern.com/AVCA poll and continues to receive votes in the CSTV/AVCA Division I Coaches Poll.

Maggie Schmelzle is second in the ACC with 36 service aces and leads the team with eight double-doubles.

In their last meeting, the Terps topped the Hurricanes, 3-1, at College Park on Sept. 25. Maryland leads the all-time series, 3-1.

Boston College: The Eagles, who will face Florida State on Friday before traveling south to square-off against the Hurricanes, have lost six matches in-a-row since claiming their first-ever ACC victory; a 3-1 win over Clemson on Oct. 7. BC is currently 6-15 overall and in last place in the ACC with a 1-11 record.

As a team, the Eagles have registered a .161 hitting percentage and are posting 2.3 blocks per game while allowing opponents 3.0 blocks per game. They are ranked third in the ACC with 17.51 digs per game and are eighth in both kills (14.55pg) and service aces (1.31pg).

Kelsey Johnson and Dorota Nienczewska carry the offensive load for the Eagles. They have posted  2.97 and 2.96 kills per game, respectively. Verena Rost is eighth in the league with 10.12 assists per game.

Defensively, Allison Anderson is ranked first in the ACC and 25th in the nation with 5.29 digs per game.

The Hurricanes lead the all-time series, 3-0, after claiming a three-game sweep in their last meeting at Boston on Sept. 23.

Tickets are $5 dollars for adults and $3 dollars for children and senior citizens. For more ticket information please contact the Hurricane Ticket Office at 1-800-GO-CANES.

Fans can also follow the all the action on the web with live-scoring on the Official Internet Home of Hurricane Athletics: www.hurricanesports.com.