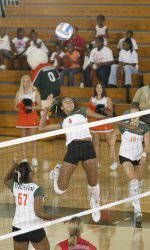 With the win the Hurricanes improve to 9-6 overall and 4-3 in Atlantic Coast Conference action while the Seminoles fall to 4-11 overall and 2-5 in ACC play.

Savage, a redshirt-junior, posted a career-high 22 kills to go along with four block assists. In the mean time, Johnson dished out a career-high five assists as well as 15 digs.

Sophomore Ashley Woods also recorded a career-high 13 kills to help lead the `Canes over the Seminoles.

Also for the Hurricanes, junior Jill Robinson registered 60 assists, 16 digs and four blocks assists while sophomore Michelle Bruin recorded 12 digs of her own.

The match opened up with Miami taking an early 9-3 game one lead. Hurricanes continued to pile on the points with a 7-5 run that put them up 16-7. The Seminoles responded with a run of their own, however, pulling to within two points before the Hurricanes regained their composure, thanks to consecutive kills by Savage, and remained on top with a 21-18 lead. FSU once again threatened, pulling to within two points before finally tying the score at 25-all. Although the Seminoles knotted up the score on four more occasions, the Hurricanes kept them at bay until FSU took advantage of a UM attacking error to take a 30-29 lead. A point-for-point battle ensued with each team taking turns at game point but the elongated game finally came to an end after a Seminoles kill gave them the 36-34 win.

Game two started with the Seminoles getting on the board first and taking a 4-3 lead before the Hurricanes took advantage of back-to-back FSU attacking errors to put them up 6-4. Miami extended its lead with an 11-6 run that brought the score to 17-10 but the Seminoles reeled off four consecutive points to pull to within five. Miami answered with a 6-1 run that helped maintain a 24-17 advantage. The Seminoles could only get to within seven points before the Hurricanes took a 30-21 game two victory.

The Hurricanes took a 4-3 lead to open game three but the Seminoles notched two points to put them up 6-4. A Miami block sandwiched by two Robinson kills gave the Hurricanes a 7-6 lead that they extended until leading by a score of 15-9. The Seminoles pulled to within two on numerous occasions but their comeback fell short as a kill by Ashley Woods would give Miami a 30-26 victory.

The Hurricanes return to Coral Gables for a two-match homestand against Virginia and Virginia Tech. Miami will face the Cavaliers Friday at 7:00 p.m before squaring off against the Hokies at 2:00 p.m. on Sunday.