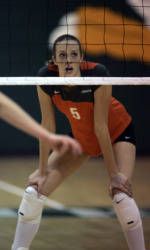 The Hurricanes are now 6-4 overall and fall to an even 1-1 in the ACC. The Terrapins, however, remain undefeated as they improve to 12-0 overall and 3-0 in ACC play.

Down 15-10 in game one, the Hurricanes notched four consecutive points to pull within three but the Terps kept adding to their lead. With the score 27-18 in Maryland’s favor, Miami rallied with a 5-2 run but could not make up the deficit eventually falling 30-24.

Game two saw a similar situation as the Terps took an early lead, capitalizing on nine Miami attacking errors, to claim a 30-21 win.

A reenergized Hurricane squad took the court in game three, matching the Terps point for point until taking a 14-13 lead. Both teams battled toe-to-toe for the remainder of the game as the 11 tied scores indicated but a kill by Johnson gave the Hurricanes the lead for good, who eventually claimed a 30-26 win.

The true battle took place in game four as Miami fought to tie the match at two-all and force a fifth and deciding game. The Terps got on the board first but the score remained tangled up until Miami took a 17-16 lead. Maryland clawed back to within one point but the Hurricanes went up 22-18 after Savage knocked down a kill that was sandwiched by two Johnson service aces. The Terps, however, would not go quietly as they tied the score at 23-all. Maryland regained the lead following a Miami attacking error, and took a 30-25 win and the match victory.

The Terps were led by Stephanie Smith and Jade Brown who both tallied 16 kills.

The Hurricanes return to action Friday, September 30th, in their ACC home opener against Clemson at 7:00 p.m. They return to the court on Sunday to face perennial power Georgia Tech, Sunday, October 2nd, at 1:00 p.m.