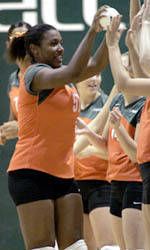 The Hurricanes (5-0), who are riding a six-match winning streak that dates back to the 2004 season, face their toughest competition to date as they look to win their third consecutive tournament after claiming both the Houston and Hurricane Invitationals. This weekend will mark the first time that Miami will face all three opponents.

Miami is led by senior outside hitter Karla Johnson, junior setter Jill Robinson and redshirt-junior middle blocker Francheska Savage. Johnson, whose 5.60 kills per game is the best in the ACC and ranked ninth best in the nation is 20 kills away from becoming only the third player in school history to surpass the 1,000 career kills mark. Robinson was named the Hurricane Invitational Most Valuable Player and is tied for third in the ACC with an 11.55 assists per game average while Savage is ranked seventh in the ACC with a .315 hitting percentage and has registered a team-high 1.10 blocks per game average.

Sacramento State:The Hornets (5-5) are currently riding a four-match winning streak after claiming their second-consecutive Sacramento State Invitational this past weekend with victories over Nevada (3-1), Columbia (3-0) and Loyola Marymount (3-1).

Sacramento State, which got off to a rough start dropping five straight, has now won each of its last four matches. During their four-match winning streak, the Hornets are averaging 17.21 kills per game, 20.71 digs per game and 3.86 blocks per game. The team is also hitting .254 over that span as opposed to its’ .147 hitting percentage through the first six matches of the season.

The Hornets are led by outside hitter Shannon Roland and her team-best 3.39 kills per game, in addition to Michelle Franz, who has registered a team-high .330 hitting percentage. Libero Kristen Lutes was named the Sacramento State Invitational MVP and leads the Big Sky Conference with 5.53 digs per game. But the nicest surprise for the Hornets has been the play of setter Natalie Melcher. The Hornets are currently 4-0 after Melcher switched from the right side. As a setter, Melcher is averaging 12.77 assists, 3.23 digs and 1.69 blocks per game while hitting .371.

Michigan State:The Spartans head into Coral Gables with a 6-1 record after going 2-1 at the Pizza Hut Jayhawk Invitational and winning their fifth straight Spartan Invitational. Last weekend, the Spartans suffered their first loss of the season to Kentucky but bounced back with a 3-2 come from behind victory over Virginia Commonwealth. All but one out of the Michigan State’s six wins have been by way of three game sweeps.

Louisville:The Cardinals (6-0), who are off to their best start since the 1990 season, received their highest ranking in school history when they were ranked ninth in the latest CSTV/AVCA Coaches poll. Louisville opened the season winning all six of its matches by way of 3-0 sweeps, including a three-game win over No. 22 Long Beach State last weekend.

Louisville is led by Lena Ustymenko, Ana Yartseva and Jennifer Hoffman. Ustymenko was named to the UNLV Volleyball Classic All-Tournament team as well as the tournament’s MVP. Against Illinois, Ustymenko posted her second double-double of the season with 22 kills and 12 digs for a .409 hitting percentage. Yartseva, an AVCA Third Team All-American last season, also garnered all-tournament accolades. Hoffman hit a blistering .700 last week in matches against Kentucky, Long Beach State and Illinois, including a perfect 11-0-16 against LBSU to hit .900. Both Yartseva and Ustymenko were named to the Preseason All-BIG EAST team.

Fans can follow every match via Game Tracker on hurricanesports.com. To access Game Tracker, visit the Miami volleyball page and click on the Orange and Green Challenge Tournament link.